Due to the recent construction of my new shed, I have this amazing excavation wall that shows the soil profile.

Apart from the fact it shows some of the worst and thinest topsoil imaginable, today it showed how water percolates through soil and can be lost downhill. The slope upwards across this photo from left to right is more considerable than it looks.

I used my fire fighter pump to transfer rain water from the new tanks (left of photo) up to the garden supply tanks behind the house (20m right of photo). That's a head of about 5.5m. The pump filled each 6000lt tank in under an hour.
However the camlock on the outbound side of the pump (where the white pipe joins the pump on right of photo) was leaking about 1-2lt per minute.
I decided it was no problem as it would water the mulberry tree right behind the pump.

Later I noticed how the water had wicked along the join between the darker top soil and the redish subsoil. Rather than the dry and hydrophobic top soil soak up the water, it had run straight through. Also the subsoil schist isn't able to soak up any moisture at all.
The results are seen in this photo. This is why it is quite difficult to keep my soil wet.

This same problem can happen anywhere soil doesn't have enough organic matter to create the sponge necessary to retain moisture.

Right where this cut was made is where I had my potato beds. Where the pump is situated in this photo was part of the chook pen so you would think the soil should be good. The greenery is lush, the mulberry is booming so there is some fertility in the soil but no real amount of organic material. So this shows that even though I did my best to incorporate lots of organic matter even with the help of the chooks, doesn't mean it was enough. To fix my terrible soil requires tons of organic matter every year. Too much work for me actually. And the loss of the water downhill shows why I am always needing to water to keep the plants hydrated. 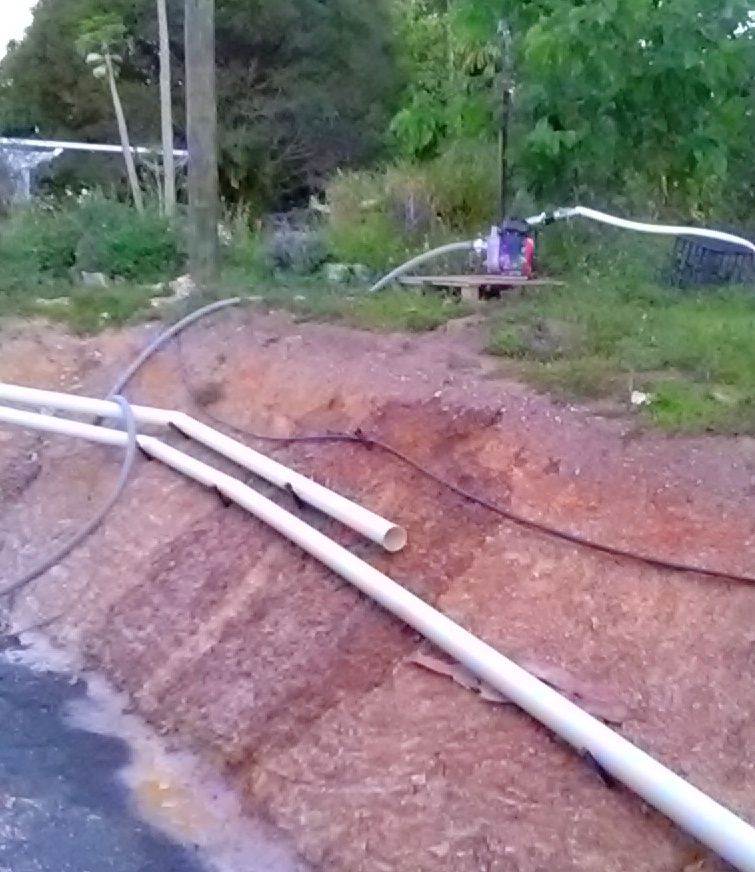