Premium Member
one of my greatest passions, along with too many others, is working with wood. Especially milling a tree to find beautiful grain and colour.

My latest project which is only as far as the first cut, is to carve a tv unit out of a solid log, 700mm dia 2m long, chainsaw style. Flat top bottom back and front with sap left on and natural. droping the saw into front to cut a whole out for dvd and stereo amp. I'll get some photo's and post latter.

Here's a couple of photo's of some other milling projects.

Premium Member
most things I've built around my place is via milling with a Lucas mill. Great for large volumes of timber needs. a mate owns it and we mill together. Timber used is turpentine for any posts in ground and woolibutt every thing else which is another prolific gum variety on my place.

Staff member
That's pretty amazing stuff there Scott and true self-sufficiency milling your own wood. How long does it take to cut a piece/plank once the mill is set up - does it cut through the log pretty swiftly or is it steady as she goes? Also, how long do you leave a fallen tree to dry before milling?

A TV unit made from a solid piece is going to be awesome! That'll take quite a bit of carpentry skill to pull off surely... Looking forward to your pics of the job and final outcome.

We purchased a handmade table (for an outside deck area) made by a farmer from Kilcoy. He cut it from a huge red gum that had been fallen on his property for many years. It's such a beautiful table and it took 6 men to carry it up our rear stairs and we needed to rest halfway up before finally getting it to the top. The table cost over 2k but we just love the look, smell, and background story being milled by hand and custom made. The top piece needed to be split down the centre to stop bowing (apparently) I don't know much about the science behind wood work... I don't think it detracts from the final product though.

Premium Member
The art was my wife and kids project, the axe is my contribution of sick humour. It does get used

The chainsaw mill is very portable. Great for reclaiming fallen trees in bush. Or cutting slabs of timber. If you want building cuts like 4x2 or 8x2 etc, your going to be frustrated on chainsaw speed. Lucas mill can't be overlooked. So fast, efficient and also portable. My chainsaw can cut a 850mm slab. Lucas can have a bar and chain installed to cut 4-5 foot. Don't forget, very heavy even at 850mm.

For every inch thinkness of timber you need to dry atleast a year. So 850mmx60mmx however long for instance, will need 2.5-3years to dry atleast, and stacked very well, if using for furniture. Even a dead or fallen log that's been down for years will need 1 1/2-2 years. As a solid log hold moisture. Best to cut green timber as your equipment needs heaps more sharpening with dryer old stuff.

A chainsaw mill cutting requires often a sharpening of chain every cut. You get quicker and more accurate at it. Still allow 5-10 minutes for doing so.

I'll post pics and discuss how I'll tackle the tv table log over the week end. Loved your dog proof pen video. It's cool you let the trees in it. Very natural and easy on the eye.

Premium Member
If I can figure out how to do video, I'll do one

Scott Mac said:
For every inch thinkness of timber you need to dry atleast a year. So 850mmx60mmx however long for instance, will need 2.5-3years to dry atleast, and stacked very well, if using for furniture. Even a dead or fallen log that's been down for years will need 1 1/2-2 years. As a solid log hold moisture.
Click to expand...

I had no idea about that - learn something new every day but I guess it's a massive chunk of wood and one couldn't expect it to dry out in a month.


Scott Mac said:
A chainsaw mill cutting requires often a sharpening of chain every cut. You get quicker and more accurate at it. Still allow 5-10 minutes for doing so.
Click to expand...

I should sharpen my own chains more often, the last few times I've taken it to my local shop and got the guys to do it but I could save $15 and do my own...


Scott Mac said:
I'll post pics and discuss how I'll tackle the tv table log over the week end. Loved your dog proof pen video. It's cool you let the trees in it. Very natural and easy on the eye.
Click to expand...

Yea, the pen may look a little "untidy" to some people but it works really well and the chooks/ducks/quail seem to all be pretty happy in the natural surrounds. I need to lower my door latch now because after about 5 years the gum tree which makes part of my door frame has grown up about an inch - true... 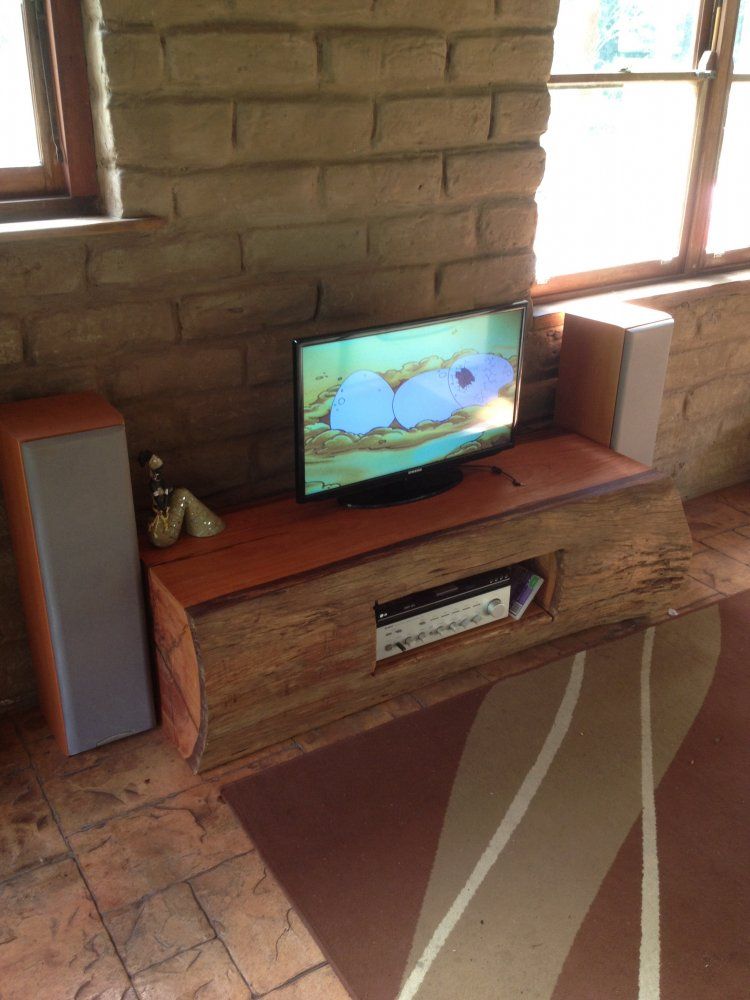 Here's a pic of my TV cabinet 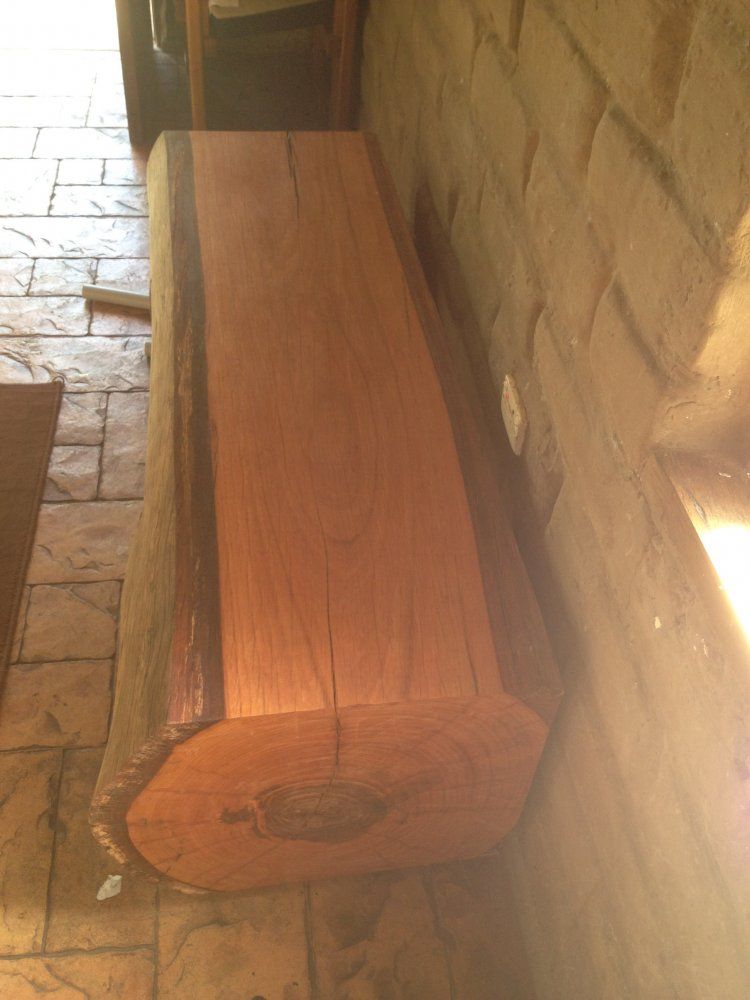 Premium Member
GOLD
You still doin' the timber Scott? A mate of mine has a Lucas Mill. He was doing a lot of Cedrus(?) Cypress Pine, old overgrown plantations down the South-east. Most of the wood in this-here Mallee country is small, but some incredible grain. Bull-oak is on the soaks, and some of the Sheoak is pretty too. A lot of the inconspicuous little trees down here have incredibly beautiful hard wood. Down in the Wimmera-Mallee of western Vic they used to make all the cattle yards out of Sheoak, because it hand-split beautifully. In my late 20's I was intent on making guitars. My mould is still at Dads. Myrtle Beech is a great wood for steam bending, as is Blackwood (Acacia melanoxylon). Laminating is a good way to get strength and/or colour contrasts. Murray Pine makes the best sound-boards (fronts). All hand-split, straight grain primo. I use(d) an antique froe, which I still have in my woodworking box. Ended up back out in the shearing sheds, and just never got back to it. All my billets Dad threw out or burnt!
The old shearing sheds in the Northern Flinders (Ranges) are a sight to behold! I was at Warrawina, Angepina and Maynards Well. Nicholls places back when.They are corrugated iron, but the whole framework is Native Pine rounds, pin and post, tensioned with wire twitches! When I tramped the belly-wool in the old Ajax press and steadied myself with the cross-wire to jump out, the whole building moved. But the gully-winds haven't brought it down in 120+ years...Shearing boards are notorious for wear. Just the action of setting down the handpiece wears out Radiata pine in a year or two, but hardwood is too slippery for the shearers mocassins. Native Pine is just right. There is an old belt-drive 6 foot sawbench at Maynards, with the small railway line and dollies to feed the logs in, and the steam engine! (not working though). Like Pulchra station out of White-Cliffs (NSW)- bloody Model-T Ford parts everywhere! Mind you, they all know the heritage value of this "junk" now. Mick Taylor was the owner of Pulchra then. My dog took her pups out bush there. We found all except one. They were 6 weeks old. 6 weeks later, he rang me and said the pup turned up. Skinny, but alive! I still have that dog today! And her mother, who is 14 and going strong. A German Coolie x Jack Russell, by ceasarean section, of course. And the pup x Blue Heeler. Mum was a tart, and one of the half-sisters of the same litter, whos father was a Labrador, (she's Mums dog), is over here with me for a holiday tonight. Another is my uncles, and old girl , Turbos' pups are throughout the region. All loved, not one I know of knocked nor snake-bitten. Genetic diversity and hardship makes a tough and wily breed. Canine or Human.
Last edited: Sep 28, 2014
You must log in or register to reply here.
Share:
Facebook Twitter Reddit Pinterest Tumblr WhatsApp Email Share Link
Facebook Twitter youtube Instagram Contact us RSS
Top Bottom