The vehicle of the future? DIY Electric Bike

Well here she is people. The trike was $279+ freight. Motor 350w , MY1016Z, $169, controller $12, plus sundries(throttle, etc.) Free-wheeling crank $43. 12 tooth freewheel cog $7. I had a keyed and threaded bush made up for the frewheeling cog on the motor as well ($100!)The batteries are 4x 15ah 12v, 24 volt system, This battery box came out a 48v electric pedal scooter. The trailer is a Repco tag-a-long. The panel 80w, foldable, is wired in series to a 24 volt controller. 25 kph safe max. with pedalling, without trailer. Old Turbo-dog rides in the trailer.
Theoretically in full sun you could go 1/4 throttle all day without pedalling at all. With little effort you barely run the battery down at all. 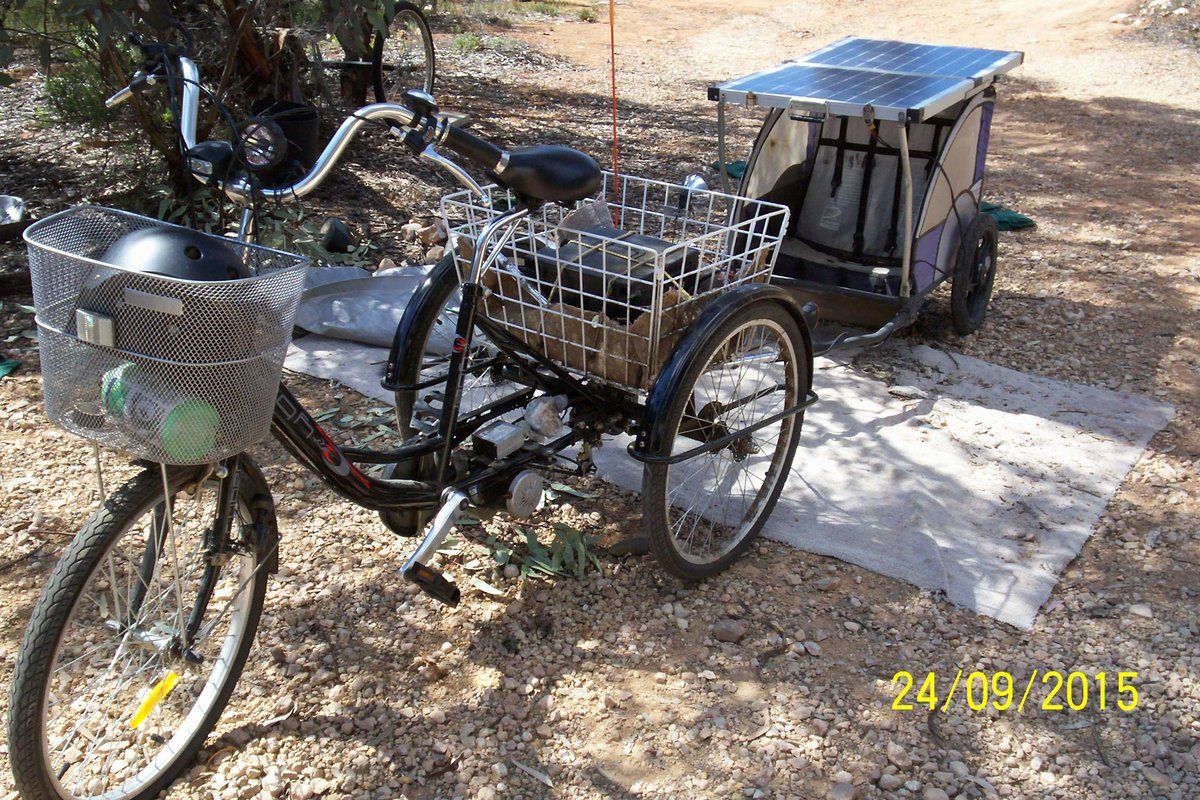 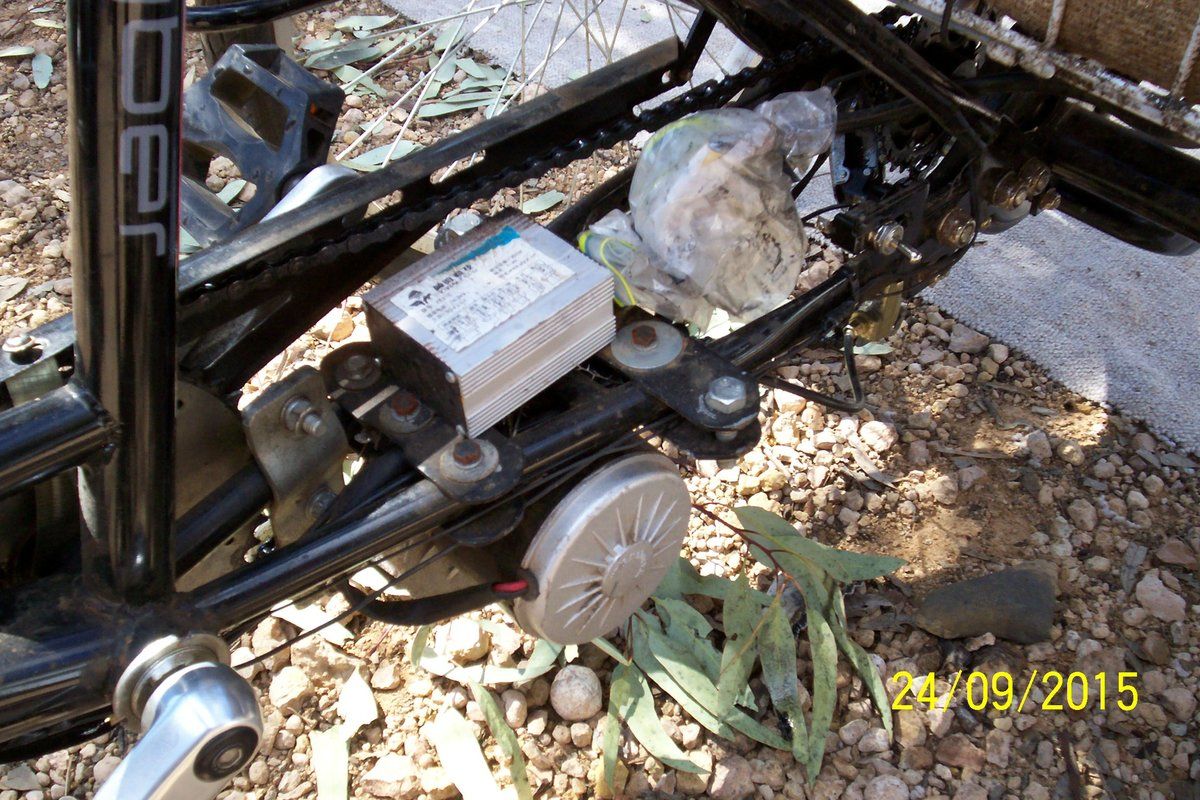 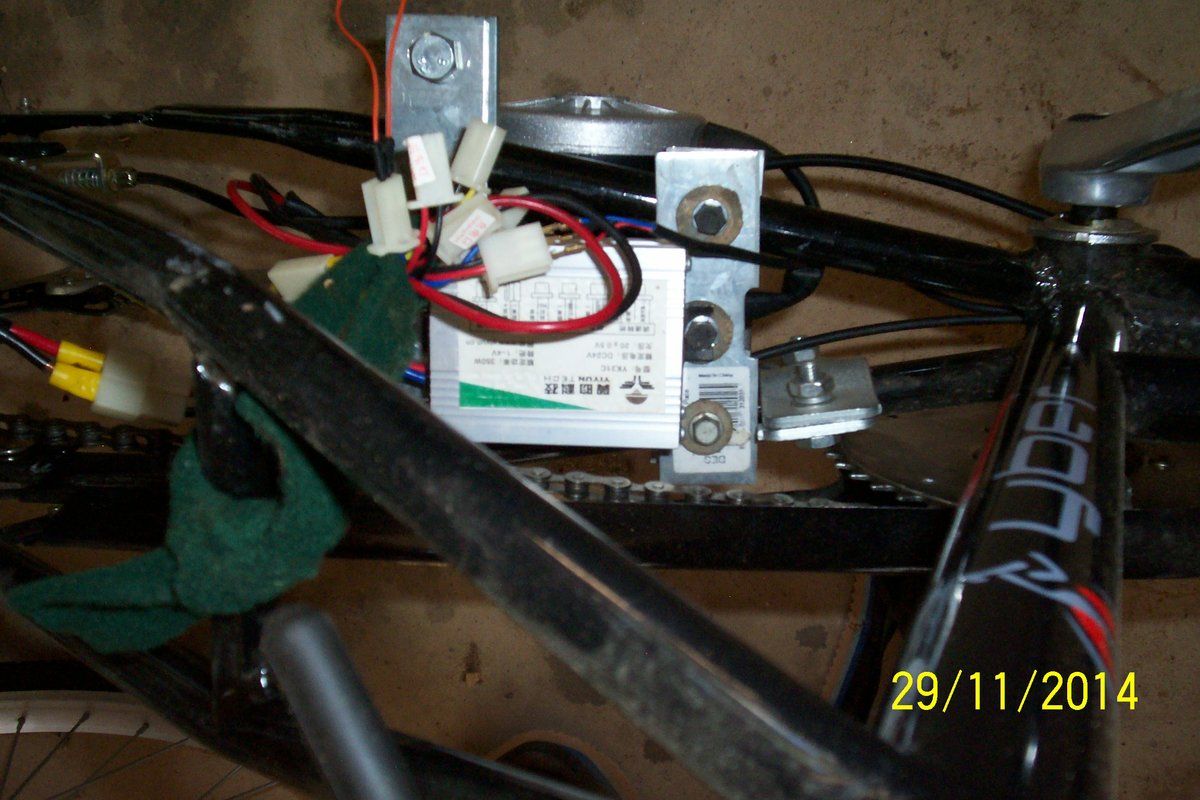 That is fantastic - you're a bloody legend mate

That's a lot cheaper than buying an electric bike from a retailer eg Reef Bikes (although they do have some good machines but I don't think they sell solar though).

What's the furthest you have travelled in your DIY electric tricycle hybrid solar powered machine?

It looks pretty safe too! I see you have a few lights on the front and one on the back - I assume one on the trailer also?

Cheers Tim thanks for sharing

No trailer lights yet. I have about 220km up on the odometer, but I haven't done a range test yet. I carry a chain breaker and spare links, as well as tyre repair gear and basic tools, because I thought their would be a lot of pressure on the chain, but so far, so good.. For a range test I will have to leave the dogs home. Actually I could harness a couple of dogs up and have no motor. But sunlight is cheaper than dog food...............
Turbo is an old hand travelling in that trailer (I used to have it behind a motorised bicycle), and she has a sore front leg at present. Bitty's too big now, so I will make a wooden tray up to go on top of the back basket for her

.
Yeah those blokes like to get a lot of money from slapping a few parts together. I couldn't justify it.
What gets me Mark is the Australian aversion to solar vehicles...Not enough money in it for the pollies and corporates I s'pose.. Most standard sized passenger cars in the burbs could even be converted, when you consider the distances travelled against vehicle downtime...All that smog from sitting at the lights avoided. Stoplights would then be a charging opportunity. It is truly only long-distance overnight travel that cannot be accomplished, and who wants to do that anyway?
Holdens at Elizabeth should have been making solar cars in the 80's, and they would be leading the world now. Instead of winding up.

Well at least we should be further down the solar vehicle path than the annual one seater run from Darwin down the Stuart Hwy - those machines have hardly changed in 20 years! Ok maybe forget the solar panels for now but at least get cracking on a battery car for a reasonable cost with a fair travelling distance... I'm happy to recharge it from the grid or the solar panels off the garage shed.
Expand signature
You don't have to be self-sufficient in everything… Just be self-sufficient in something!
Self Sufficient Me (Blog)​

They exist, and are cheap, mainly made in India. They pass the EU safety standards, but our guvment keeps 'em out. They put in airbags, so our guvment bumps up the import standards again so they now need side airbags, etc., etc. California probably would have them if not for Americas gas-guzzling capitalists...until they work out how to tax our sunlight...why not ? They are already doing it with our water, and they would do it with air if they could.

Tim C said:
until they work out how to tax our sunlight...why not ? They are already doing it with our water, and they would do it with air if they could.
Click to expand...