These (warm) days, whatever I do outside, be it pruning the plants, fixing a wall or just mind my own darn business, wasps keep getting in my face trying to tell me all about how I should be joining their Church of Wasp Witnesses.
Today I've discovered a nest in one of my composts.. I usually wouldnt care, but it's near a neighbour who've got a young kid - and I dont want him converted (+I'm kinda allergic; my hand is swollen like a Jap. pumpkin atm)

Sooooo... what measures do u guys use to keep wasps at bay?

note:
not these guys: 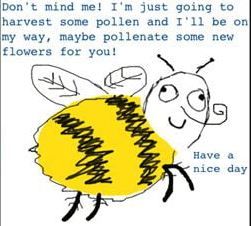 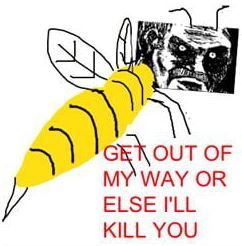 thanks
Last edited: Aug 10, 2020
"Say something wise and your name will live forever" - Anonymous

Sometimes when I close my eyes, I can't see.

Good luck. I have paper wasps, and they are generally pretty benign. They buzz around me while I am in the garden, because they like the same foodstuffs as the bees, and there is water out there, but I have yet to be stung by one. Yellow jackets, OTOH, are mean little SOB's. I have a friend who has a rural property, and he is always fighting the fight. He has wasp traps out and cans of wasp killing spray at the ready, and he still gets wasps every year. I have tried the bait stations in the past, but have never found one that I think is worth the cost.

spector said:
He has wasp traps out.
Click to expand...

I want to try to keep the massacre as natural as possible..
online, I'm seeing lots of trap instructions (mostly some sort of sugar water w/ soap) -- any thoughts on that?

> last night I stuck a waterhose in the compost and drenched it..... yeh. that didnt help, if anything, they are more active now repairing the damage.
> am thinking of tumbling the compost (it's one of those quick composters in a plastic hull) tonight and spreading the contents, with the hopes to disperse the buzzing contents ----- anybody got experience if that's a smart or awfully dumb thing to do?

I think they are European Paper Wasps, so there should not be immediate danger, yet I want to get rid of that nest asap.
I've already got massive issues with having built my wonderful high-bed right between two lilac trees that are being frequented by about 50 hornets at any given time (yes, yes; they are not harmful if u leave them be: I call bs!)
Last edited: Aug 7, 2020
"Say something wise and your name will live forever" - Anonymous

Sometimes when I close my eyes, I can't see.

If they are paper or mud wasps, they should leave after you destroy their nests. You might have to do it 2-3 times to discourage them. I *think* paper wasps have several queens, and each queen will just hide out and then start a new nest, so vigilance is key. I get paper wasps up in my eaves, and since my house is three stories high, I get a high pressure nozzle and soak from a safe distance. They will come back almost immediately after the first destruction, probably because a lot of them were gone when I hit the nest. Usually, twice will be enough to discourage them and get them to move on.

If you put out a drowning type trap and use sugar, you will also trap/kill all other flying and pollinating insects. Some wasps (including hornets) are attracted by meat, and the best trap I have heard about uses a piece of raw shrimp. Once it gets well and truly rotten, it should attract the meat-attracted wasps but the bees and other nectar-only eaters won't even investigate. I don't know if paper wasps fall in that category, unfortunately.

Some of the commercial wasp traps are natural, using a pheromone attractant to bring the wasps in, and then they can't get out and drown/die in the container.

tried the sugar water + soap, 4 bottles; not a single casualty -- perhaps I am impatient... or the fresh apple waste from the juicer is more attractive (d'oh).
Thanks for the very helpful tips.
> I'll trash the pile tonight and convert it to my backyard compost.
(in a hurry b/c the infested compost is right under our elderberry tree which is quite ready. it'd be a huge bother to not have that harvest).
"Say something wise and your name will live forever" - Anonymous