as suggested, it's probably the worst time of year to set up this kind of thing because of the extreme conditions.... but you could also say it's the best time, because if you can get it right now, you might very well prosper in the easier / gentler periods . ... always looking at the positive

I found some red worms in the water today, i thought the worst.. then googled it... it turns out that they're not bad. People even buy them to feed their fish? Little Midgy fly worms. http://www.watersafe.co.za/2011/01/14/red-worms-in-your-water-tank/

From that article, if you don't have your water tank sealed off (with mesh or similar) you will probably have these in there!
my native bee website http://nativebeehives.com/​

My pond water has become green! I just did some googling. It seems it's an algae which isn't that bad. Possibly due to recent rises in temperature coming out of winter, overfeeding of fish? (I hardly feed anything but may be possible), not enough plant life to draw nutrients from water or provide shade for water.

I think i'll just leave it alone, maybe put some water lillies in there.

here's an article I found on the subject: http://www.creativepumps.com.au/zpumps/green_water_problems.htm
my native bee website http://nativebeehives.com/​

Why not put a few plants in - yeah, sounds good and I'll look nice too.

I was watching a show on Foxtel the other day called 'Preppers'. Anyone seen it?
Basically its about people who are preparing for a world-wide catastrophe of some type and they come up with ways to survive. It normally consists of a way of growing/hunting food, shelter, water, and protection (lots of guns!)
It's pretty interesting but most of these people are fanatics and they spend every last dollar on their 'prepping'.

Anyway, the story the other day had two guys with a aquaponics set up with all sorts of things growing and living in it. It looked quite involved but it seemed to work. He did say that you will kill lots of fish getting it all set up and going and then once you are happy with it, it only takes a small upset in the balance to throw it all off and you can lose a lot of produce.
I liked it and thought it was pretty cool but at the same time it looked like a lot of effort that could go balls-up pretty quick with one wrong move.

ooo I've never heard of the show but sounds good. I like that kind of stuff even though I may not agree with it all. Maybe we need a "prepper" thread

yeah I think because my pond is exposed to the elements some things may be hard to control. If you had a fish tank inside it'd be easier to control.
my native bee website http://nativebeehives.com/​

ooo I've never heard of the show but sounds good. I like that kind of stuff even though I may not agree with it all. Maybe we need a "prepper" thread

I was watching a show on Foxtel the other day called 'Preppers'. Anyone seen it?
Click to expand...

Yes I have seen the "prepper" shows and they are very interesting and I quite enjoy the assessments after when the pros rate their "prepping ability" (if this is the same show we're talking about). Some of it is a touch fanatical but...

I'm sure we can add to the new Survival Skills section quite easily.

Aquaponics does have that danger of one tiny contaminate and there goes your system! In some respects large scale aquaponic farming is better (like yabby farms and ocean fish farming) but then the cycle of growing food etc and the holistic concept gets lost.
You don't have to be self-sufficient in everything… Just be self-sufficient in something!
Self Sufficient Me (Blog)​

In June 2013 I put in some Bass and I thought they'd all since died, but yesterday I saw one swimming! I haven't even been feeding it since. I have occasionally put in some chicken pellets for the crayfish, maybe once every few weeks.

For a filter I have the plastic tub full of gravel, and I've added a bag full of sponges which I have the water pump hose directed inside the bag, and I remove the bag and squeeze it out every day. This seems to be working to help clear up the green water issue. I added a 3m triangle shade sail to try stop the midday sun hitting the water, apparently the sun on the water contributes to it going green. (too many nutrients in the water)

I'm thinking I should change the plan and instead of growing crayfish and just grow some fish, mainly because crayfish try to kill each other in a small area and fish might be more successful. 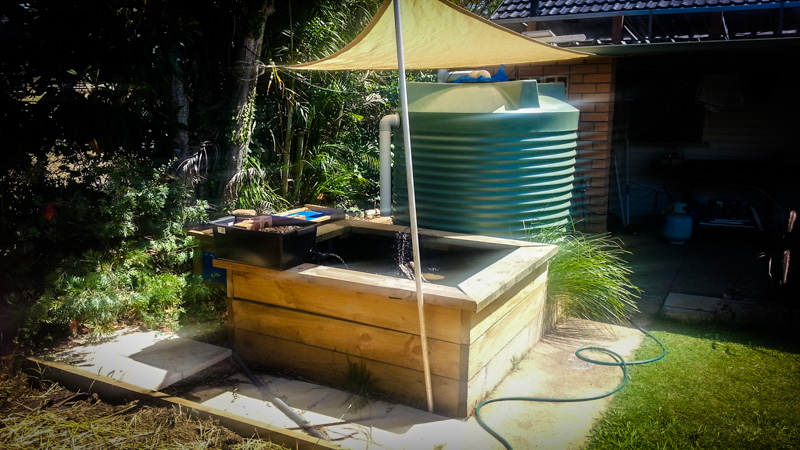 Have you thought of placing a grow bed over the top of the pond and just leaving a small gap? That could help to solve the sun issue and possibly be a bigger filter for the pond - plus produce some nice salad and herbs (obviously). What'd ya reckon?
You don't have to be self-sufficient in everything… Just be self-sufficient in something!
Self Sufficient Me (Blog)​

Mark said:
Have you thought of placing a grow bed over the top of the pond and just leaving a small gap?
Click to expand...

I was planning to make a better gravel filter that looked a bit nicer than a plastic tub, but now you mention it, maybe I could make a small grow bed... added to the list

stevo said:
I was planning to make a better gravel filter that looked a bit nicer than a plastic tub, but now you mention it, maybe I could make a small grow bed... added to the list

That's awesome Stevo.
How much bigger was the fish from last time you saw em?

Steve said:
That's awesome Stevo.
How much bigger was the fish from last time you saw em?
Click to expand...

cheers Steve, it kind a looked like the same size as when I put them in, possibly because they haven't been fed

. New head count, 2 crayfish and I'm not 100% sure, but there may be 2 fish. I was throwing some fish pellets in and they were swimming around, unless it was the same fish and really fast.
my native bee website http://nativebeehives.com/​

Lovely clear pond, I can only wish for mine to be like that, we have had so much sun that my pond is constantly green lol

update.. I was trying to catch a crayfish in a trap but got a fish instead. Australian Bass, Maybe double the size of when I put them in 1 1/2 years ago. Not bad considering they don't get much food. I didn't feed them for 6 months because I thought they were dead, then I saw one and started to feed them, but then ran out of fish food, I have to get some more... I caught one. Took me ages to convince it to pose for a photo.... Well there ya go! Your fishes are surviving without hardly any effort - the perfect aquaponic system needs is a hardy fish that is easy to look after hey. That cray must have just popped his head up for a quick peek?
You don't have to be self-sufficient in everything… Just be self-sufficient in something!
Self Sufficient Me (Blog)​

umm, well, I must confess it needed some help, I tied some wire around it so it wouldn't swim away

... It was released unharmed ofcourse....

I upgraded the pond filter system. The old tub was pretty good but didn't look very sexy. It did have a heap of Water Cres growing which was pretty cool. I made a new box with pine sleepers and pond liner, it's very solid and matches the pond style. I've also gone a bit arty farty and added some old water taps, I laugh every time I walk past it. The old tub was around 40L, the new box is around 70L. I've transferred all the plants in to pots for now. 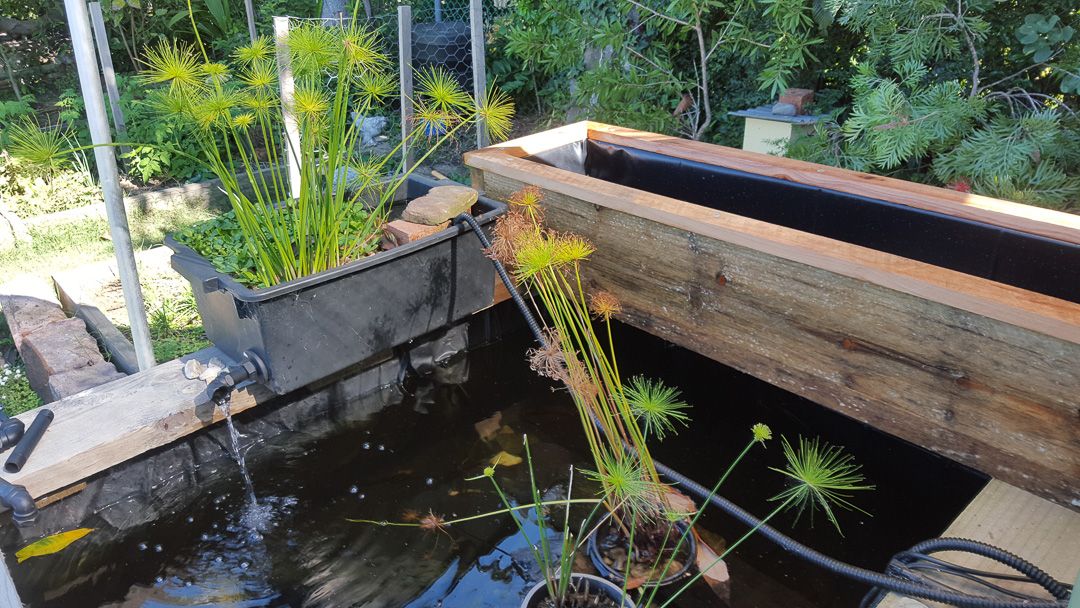 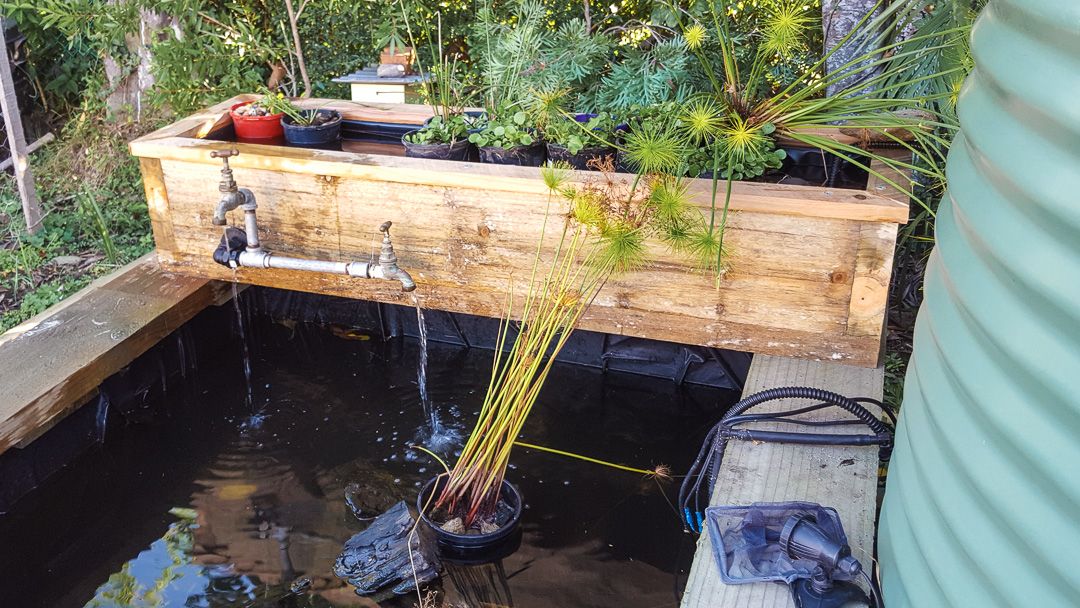