Inspired by Mark...and having too much

On Sunday, we had a ham for supper and, as we often do with ham, made scalloped potatoes. The challenge is that I sliced too many. I often use the mandolin for this task, but this time I used a knife as one of the potatoes was too large to use that tool without cutting it first. Anyway, the long and the short of it is that I sliced too much potato...what to do? I went online to get ideas for how to oven-bake chips (or crisps as they are known in some parts of the world). Basically, rub the slices with a bit of olive oil to coat them, then onto a parchment lined cookie sheet. A bit of salt, then whatever seasoning you want to apply...this time I added some homemade paprika, rosemary, dill, and garlic powder. Into the oven (from memory 425 F, but I could be wrong on that). They didn't come out as nicely as I had hoped, but I'd call it a success for a first time - by using the knife, there was some disparity in potato slice thickness, so while they all cooked, the thicker ones didn't get crispy, while the thin ones got dangerously close to burning. A mandolin is a solution to that, but our present one would slice too thick for this purpose...we want to get an adjustable one that allows for thinner slices. 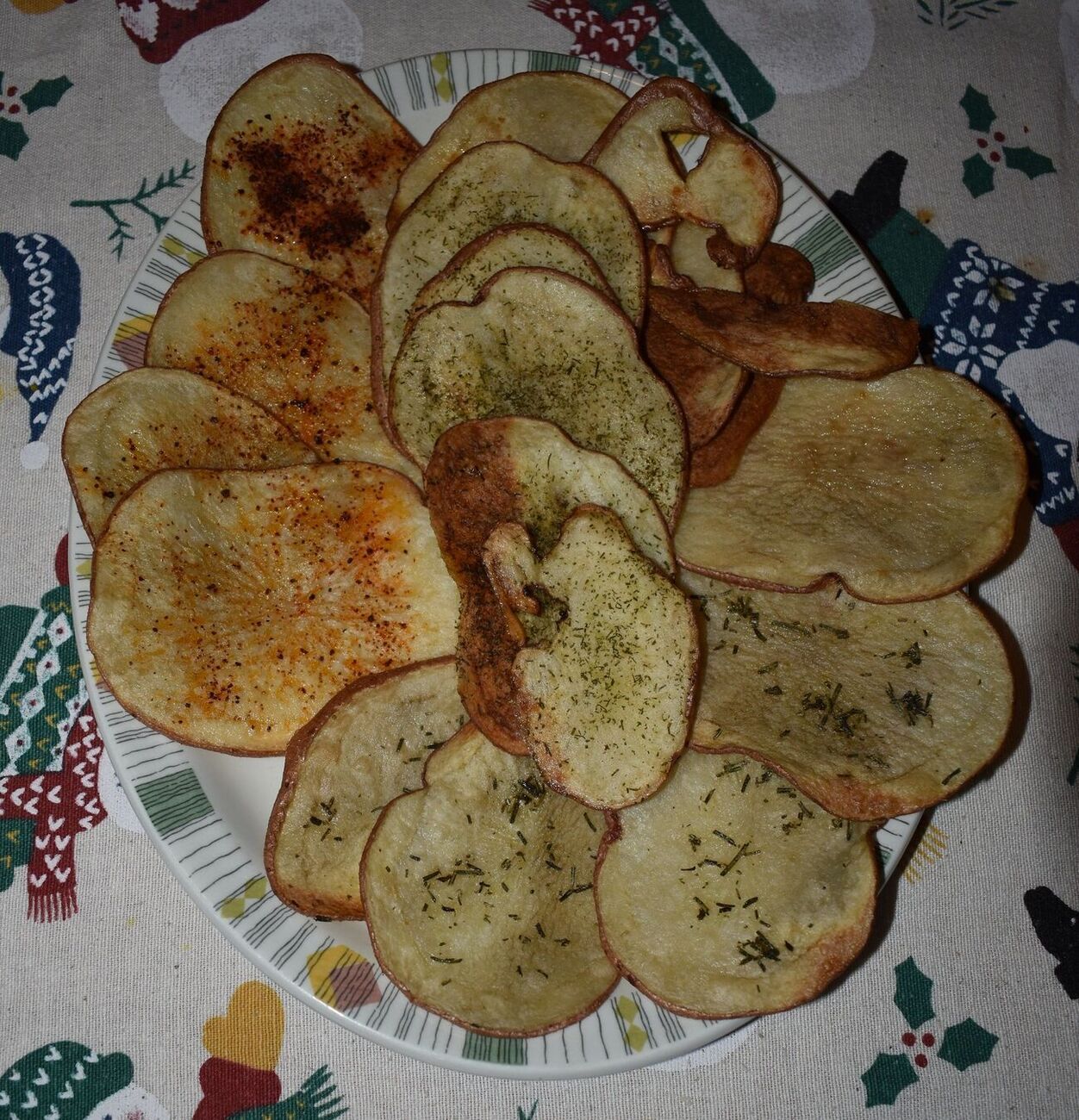 Finished result, such as it was...I look at it as a tasty learning experience and healthier than Old Dutch or Lay's potato chips.

@Mark had done a video with fermented cherry tomatoes that he put on some bread / toast like a bruschetta. Since I'd fermented some, we finally got a baguette and I got to work. Again, looking online, I found some additional inspiration - this one recipe suggested drizzling olive oil on your baguette slices and baking until they are crispy. In the meantime, I chopped up a big clove of garlic, a bit of onion, fresh basil, and tomatoes. One nice thing about fermenting cherry tomatoes whole is that they become almost a burst of fizziness...I'd read that somewhere before starting the fermentation. Of course, I needed to try one myself and I enjoyed it enough that I thought it best to share and brought one to She Who Must Be Obeyed. Anyway, they popped / crushed nicely into the mix. Since you want the bread to remain crisp, don't put on your topping until ready to serve. The recipe I found suggested drizzling with a balsamic reduction...I ran out of time to reduce the balsamic vinegar we have. That all said, they were enjoyed and I was told I'm allowed to serve this again. There was a bit of leftover mixture, which may be used as a salsa or thrown into a pasta sauce. 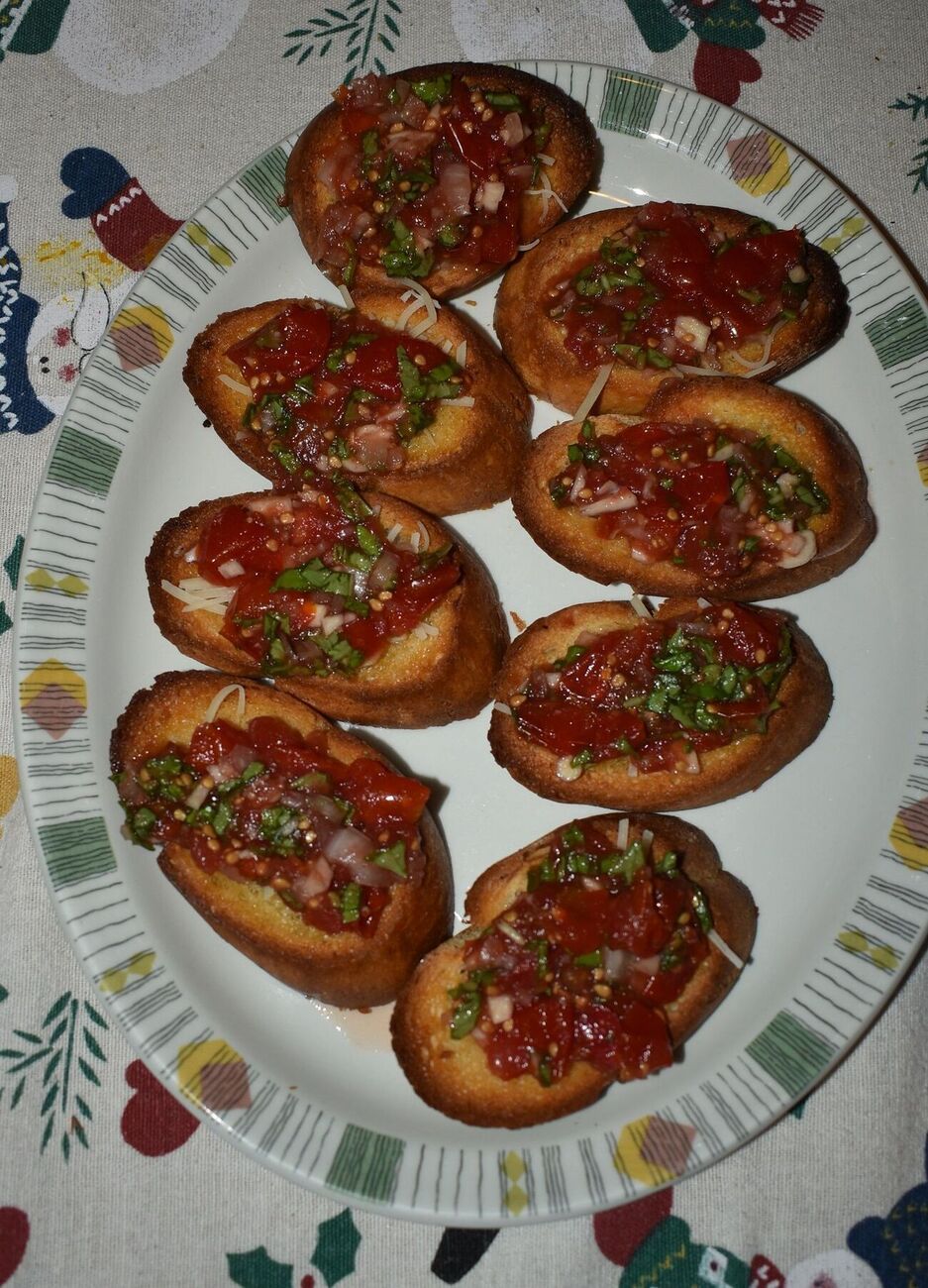 Now the question is whether I'll be permitted to ferment more tomatoes next year...2022 was the first year I tried any fermenting, so we generally took things slowly, doing small batches to see how we like things and how well we could make it work. Some things have definitely worked out better than others.

I did make some fermented salsa as well...the nice thing is that in the fridge, the saltiness seems to have mellowed somewhat.
Derek
Winnipeg, MB, CAN (city place)
Sperling, MB (country place / orchard)

The tomatoes have a lovely colour and look really good. I think it'd go really well with a little bit of mint as well.
~ Self Sufficient all of us ~

I watched an Asian lady cooking one time and she had a bag of pre-made/set-up chips/crisps that she freshly deep fried. So, of course I had to have a go. I Googled the instructions which are basically - slice finely (best with a mandolin), blanch them (sorry, I can't remember for how long), and then dehydrate them so that they can be stored away. Then when you want to munch you can deep-fry them freshly and add what flavourings you want.

What was the cherry tomato fermentation process?
Aussie Bush Tucker - An Introduction to Common Native Foods of Australia

A Beginner's Guide to Edible Weeds