After watching lots of Mark's videos, I decided it would be a good idea to join this forum too.

I am Englishman living in Freiburg, Germany. I decided to get into "gardening" more as something to do as a hobby at home during the time I thought we would be locked at home due to COVID, rather than as a "self sufficiency" thing in itself. However, I am very interested in the environment/sustainability, and work in the sector, so it is a natural fit.

I have a smallish, south-facing ground floor terrace. Most of it is concrete slabs and sheltered from rain by the balcony above, but there is about 18 inches at the front that gets both direct rain and sun much of the day. I have a small area of soil that is about 1.5m x 1.5m - half in the shade, half accessible to rain and sun. Mostly it had non-vegetable plants such as a rose bush, some lavender, ivy, that kind of thing. And so it was left last year with a couple of added bedding plants for colour. I discovered that not much grows in the shady corner though (more more below).

I began by making some simple and cheap wooden planters, to line the front of the terrace, a couple about 1m x 30cm, and a couple 40cm x 40cm, and a more creative "pyramidal" planter (which perhaps I will share on one of the forum pages). I started with an interest in flowers bought from the local supermarket, but after much searching I sought out my local garden centres which sold "plugs" very cheaply which got me interested in veg (first of all lettuce, broccoli, celery, onions, leeks etc.). I thought I would experiment with shop bought garlic, and also added some seeds such as carrot, pak choi, bush beans, peas etc. I am also growing 7 tomato plants (in grow bags and buckets), and 4 pumpkins/squash (two in buckets, two in the wooden planters, both vertically up wire fence meshing according to videos I saw on youtube and pictures on pinterest that first inspired me).

Recently I got into these metal planters that Mark uses. I bought one (80 x 80 x 80cm) which I put in the area where nothing grows, in the hope by raising planting off the ground it would get some sun and improve the soil. And I ordered some potatoes and sweet corn to go in it (I cannot find anyone approving of this combination online, but let's see how it goes). As I had more seed potatoes than I could fit in there, I have also added more to large plastic pots and metal buckets; but so far the big metal planter is much more successful. They are growing really well, even though I have planted them a bit late I hope for some kind of harvest later in the year.

You can see the basic set up below (the wooden decking is a recent second-hand addition!). 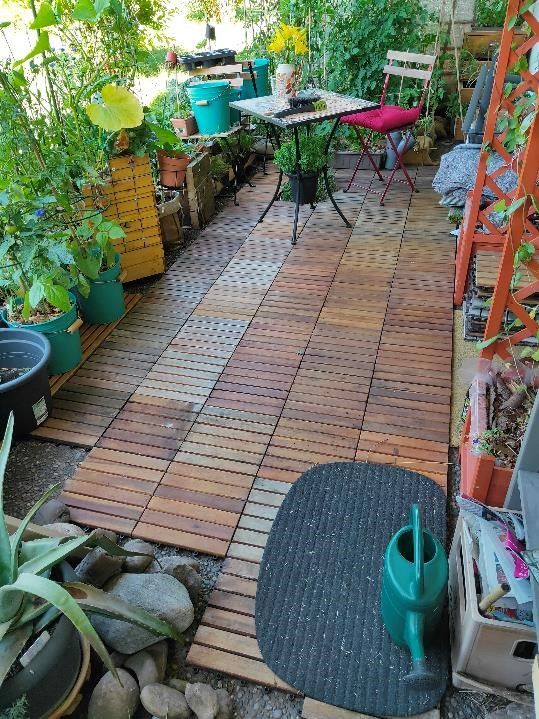 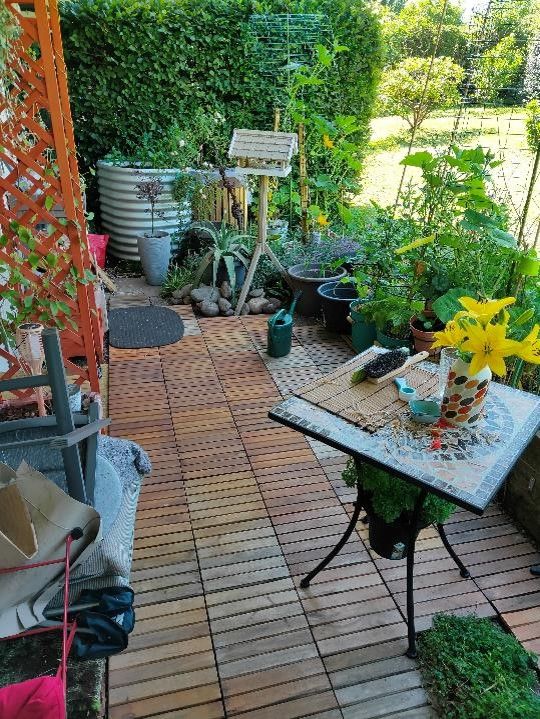 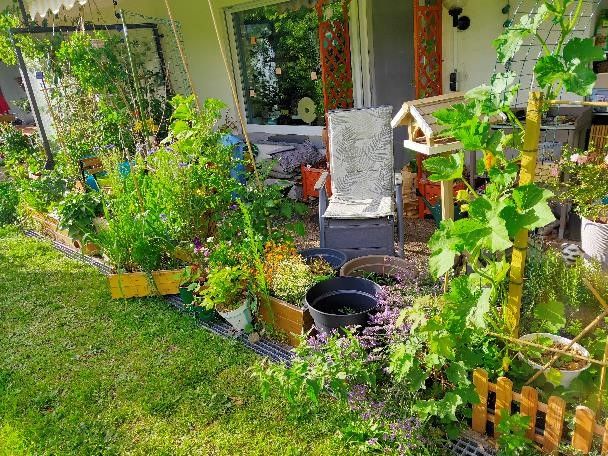 This year I see as an experiment - something to keep me occupied, what grows well here, what do I enjoy growing, what gives a good crop. I can see myself investing in another larger metal planter next year.

However, following the hugelkultur method I have had a couple of unforeseen problems. The compost really stinks when it is watered - I don't know if it is the brand, but I have to be really careful with it so as not to ruin life for myself and the neighbours. And I think one of the logs may have had ants in it, so I have had to buy some poison to try and control that, as burying them alone didn't kill them. Oh, and lots of earwigs I think encouraged by the addition of woodchips on the base and for mulch (how could I forget!). So these are things to watch out to if you are setting up a balcony/terrace garden close to the house and other people.

I look forward to having a look round the forum and seeing what's what as well as continuing to follow the good video advice.

Let's get into it.
Reactions: Mark, Red Earth Farm and Geo

Your presentation is so cool and I love the pictures and ideas. Experimenting in the garden is always a good idea. Often times good results come from experiments

I'm not sure, but it may be the case that you used too much compost. Now of course there's "no such thing", most plants grow well and thrive in good compost, but maybe mix less within your soil would yield the same results but with less of the odor. I hope the neighbors forgive you
Reactions: Mark

Love the pics, love the passion and love the use of space. Nice one.

Expand signature
Play in the dirt because life is too short to always have a clean fingernails.
Reactions: Mark

Another great example of small space gardening Reggie thanks for sharing and for joining us here on SSC!


Reggie2020 said:
The compost really stinks when it is watered - I don't know if it is the brand, but I have to be really careful with it so as not to ruin life for myself and the neighbours.
Click to expand...

That is unusual and I'm not sure why this is happening but perhaps don't get that type of compost again (obviously) but also making your own should be easy enough for a small garden. The problem will big gardens like mine is making enough compost!