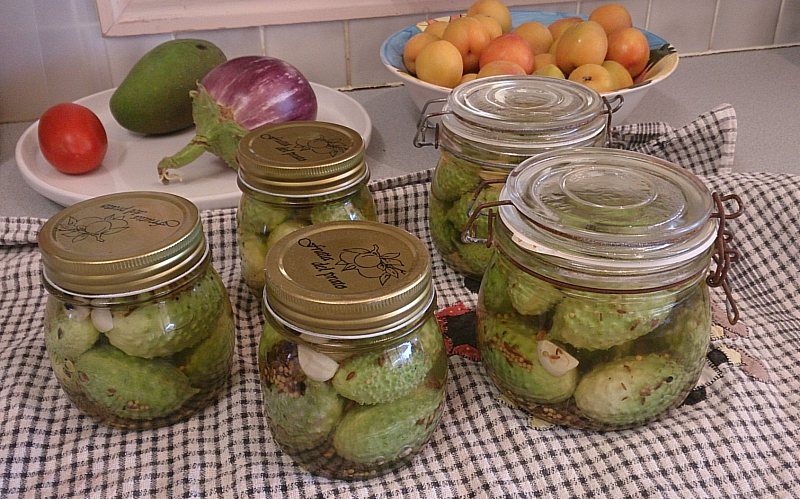 Cucumbers can be tricky to grow in a hot subtropical climate like mine but I have found a cucumber which thrives in hot and humid conditions and it's called the West Indian Cucumber. The fruit is small and bite sized and is best harvested when young at no bigger than two inches.

Due to the size and mild taste of the West Indian cucumber it lends itself well to pickling so I thought I would share a few images and of course the recipe.

More about the West Indian cucumber

I've only been growing this variety of cucumber for one season so I still have much to learn about this fruit/vegetable plant. Here's what I know so far:
*Check out the other tabs for my pickling recipe and method.

Method
​
Wash the cucumbers and using a tea towel or cloth rub off any spines from the surface of the fruit.

Place all the ingredients (except for the cucumbers) into a pot and bring to the boil than take off the heat.

Tightly pack the cucumbers into the jars leaving a gap of a few centimetres from the top.

Pour the hot pickling solution over the cucumbers filling the jars almost to the top to cover ensuring an even mix of spices and at least one piece of garlic goes into each jar.

Place the lids on tightly and leave to cool. Store in a cool dark place (cupboard or pantry) for at least 4 weeks to allow the pickles to develop. The pickled cucumbers should last at least a year in storage, once opened refrigerate and eat within a few weeks.

Tip - If you have any spare pickling solution left over try not to waste it by simply storing it in the fridge then reheating it for another jar or two. Plus, if you have other things in the garden like chillies/jalapenos you can use them to make up half an empty bottle etc.

Best eaten as a snack by themselves but all pickled cucumbers go great in salads or on sandwiches/burgers etc. Try adding some diced in a fried rice for something really different it tastes awesome!

where did you buy these cucumber plants? What part of the country?
Linda
Linda I got the seeds online here in Australia see this post.
http://www.selfsufficientculture.com/threads/anyone-know-of-a-good-cucumber-variety-to-grow-in-a-subtropical-climate.5/#post-426

Often people will sell this heirloom variety of cucumber on eBay - just do a search for cucumber seed and scroll through the listings checking out the images until you see the right type because some sellers don't sell them by the correct name.
You don't have to be self-sufficient in everything… Just be self-sufficient in something!
Self Sufficient Me (Blog)​


​
I will look on Ebay for this cucumber it looks interesting and I think I can get it to grow in SouthWest Florida.