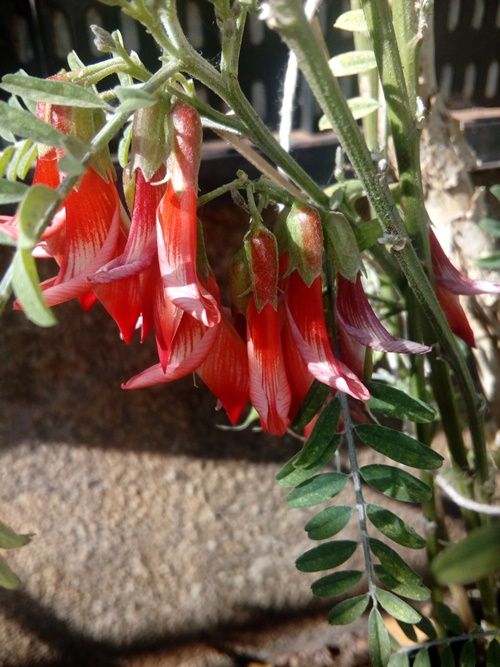 I do not use conventional medicine at all and every year I try to add a few more medicinal plants to my collection. Last year October I bought a cancer bush, because it has many medicinal benefits. From what I read, the plant is supposed to flower in Summer, but my plant started flowering the last month of Autumn (May) and is now still flowering in winter and also producing seed pods, so I will have seeds available to plant from next month, can't wait!

Pics of how the plant looks currently, including pics of the seed pods, is attached to this post.

More details about this plant:
Lessertia frutescens is a much-respected and long-used medicinal plant that is also an attractive garden plant, and has been cultivated in gardens for many years for its fine form, striking colour and luminous flowers. It was previously known as Sutherlandia frutescens.

Lessertia frutescens is an attractive, small, soft-wooded shrublet, 0.5 to 1 m in height. The leaves are pinnately compound, the leaflets 4-10 mm long, grey-green in colour, giving the bush a silvery appearance. They have a very bitter taste.
Lessertia frutescens occurs naturally throughout the dry parts of southern Africa — in Western Cape and up the west coast as far north as Namibia and into Botswana, and in the western Karoo to Eastern Cape. It is also found in KwaZulu-Natal and Mpumalanga. It shows remarkable variation within its distribution.
Lessertia frutescens has many common names. It has become widely known as sutherlandia, The name cancer bush, kankerbos, comes from its reputation as a cure for cancer. The names balloon-pea, blaasbossie or blaas-ertjie (meaning bladder-bush or bladder-pea) all refer to the inflated, bladder-like fruits.

Uses
This plant is one of the most talked about in the ethnobotanical world because it has a strong reputation as a cure for cancer and now increasingly as an immune booster in the treatment of HIV/AIDS. Research on its properties is ongoing.

It has long been known, used and respected as a medicinal plant in southern Africa. The original inhabitants of the Cape, the Khoi San and Nama people, used it mainly as a decoction for the washing of wounds and took it internally to bring down fevers. The early colonists regarded it as giving successful results in the treatment of chicken pox, stomach problems, and in the treatment of internal cancers. It is also known to have been used in the treatment of eye troubles, the eyes being bathed with a decoction of the plant. It continues to be used to this day as a remedy for the above-mentioned ailments. It is still used as a wash for wounds, to bring down fevers, to treat chicken pox, for internal cancers, and farm workers in the Cape still use it to treat eye troubles. It is also used to treat colds, 'flu, asthma, TB, bronchitis, rheumatism, rheumatoid arthritis and osteo-arthritis, liver problems, haemorrhoids, piles, bladder, uterus & 'women's' complaints, diarrhoea & dysentery, stomach ailments, heartburn, peptic ulcers, backache, diabetes, varicose veins and inflammation. It is also used in the treatment of mental and emotional stress, including irritability, anxiety and depression and is used as a gentle tranquillizer. It is said to be a useful bitter tonic and that a little taken before meals will aid digestion and improve the appetite. It is considered to be a good general medicine.

There is as yet no scientific support for the numerous claims and anecdotes that this plant can cure cancer, but there is preliminary clinical evidence that it has a direct anti-cancer effect in some cancers and that it acts as an immune stimulant.

Sutherlandia should not be regarded as a miracle cure for cancer — its real benefits are as a tonic that will assist the body to mobilize its own resources to cope with the illness. It is known to decrease anxiety and irritability and to elevate the mood. Cancer patients, as well as TB and AIDS patients, lose weight and tend to waste away. This plant dramatically improves the appetite, and wasted patients start to gain weight. It is also known to improve energy levels and gives an enhanced sense of well-being. It is hoped that treatment with Lessertia frutescens will delay the progression of HIV into AIDS, and even remission of the disease is hoped for.

Growing Lessertia frutescens
Lessertia frutescens is fast growing and easy to grow, but short-lived as a garden subject. It is a tough, hardy plant that does well in full sun and tolerates all soil types. It occurs both in summer and winter rainfall regions, and is quite drought-tolerant so does not require much watering. When growing it in containers, make sure that it is well drained and don't over-water. The plant is also quite pest-resistant. Plants seed themselves readily, so that as the older plants start to look past their best they can be removed.

It makes interesting temporary filler in the mixed border, rockery or shrubbery, especially if it is planted in groups or en masse. It is also a good contrast foliage plant against a green backdrop and can be used effectively to punctuate a soft landscape planting. It is also a must for the herb garden. It grows well in containers, and can be used as a temporary decoration for the patio or courtyard. Because they are fast and tough, they also work quite well as pioneers in a new garden, where they give cover and colour while the slower growing perennials get going.
Reactions: Shelle
Share:
Facebook Twitter Reddit Pinterest Tumblr WhatsApp Email Share Link

Thanks for the comprehensive information. I have never heard of this herb and will look into buying some seed when i finally start my medicinal garden.
Thank you for being so informative.
I’m interested to know where you found your plant. Thanks.