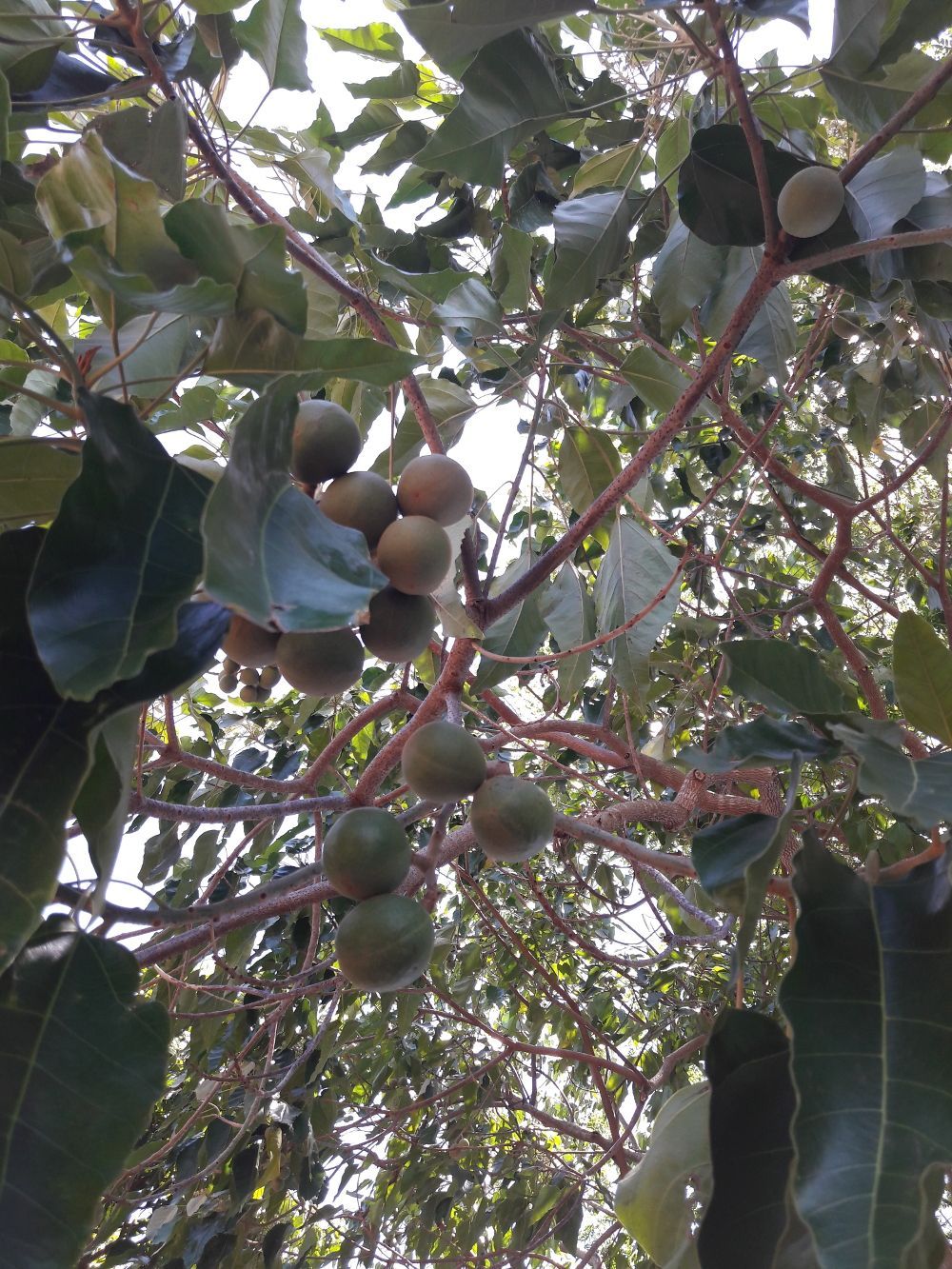 Probably more useful as candles than as food, at least in my experience!

Candlenut trees hail from the genus Aleurites (A.), Australia being home to two notable species. Otherwise known as Indian walnut, carie nut and varnish tree, A. moluccanus is by far the most common of these. Older sources might still utilise the former nomenclature, A. moluccana (Willdenow, 1805) or Linnaeus's 1753 Jatropha moluccana. The other relatively common candlenut found in Australia is A. rockinghamensis. There is one A. fordii growing in the Anderson Gardens in Townsville and possibly others elsewhere.

Candlenut has many close relatives that grow across Asia and the Pacific including deciduous varieties from genus Vernicia which are common in China. These species will not be otherwise covered here, but note the caution on toxic look-alikes below.

Candlenuts are a tropical and subtropical tree by nature, preferring rich, moist soil in rain forests and gallery forests near the coast all across the Pacific. They are especially prolific in Indonesia, Timor, Malaysia, Philippines, India, China and the African east coast. Candlenuts were introduced to most Pacific islands by island-hopping seafarers in bygone millennia, and are an important ceremonial item in Hawaii. In Australia's northern Queensland, it can be found up to 800m in elevation. Candlenut is one of the first reoccupiers of cleared or broken ground, such as fire trails, agricultural land or cyclone-damaged areas. It grows extremely fast.

In Australia, candlenuts are mostly limited to the north Queensland coast, mostly between Mackay and Cape York, with some isolated pockets also growing in South-east Queensland and northern New South Wales. 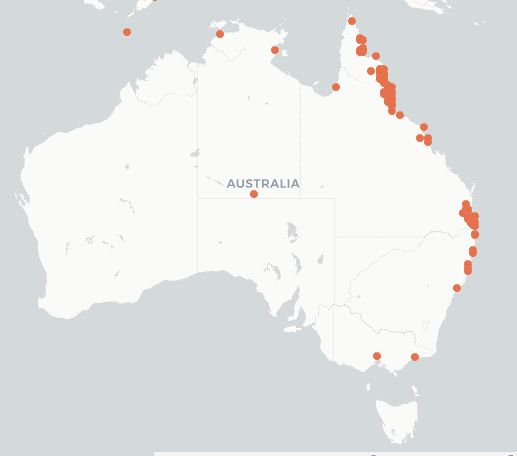 Key Identifying Features
Look for stout, whitish trees with streaky bark, often with splotches of algae, moss or lichen on the trunk. Rain may cause the colour to shift to brown. Mature candlenut trees generally have a large profile, being 15-30 m in height. Their lateral branches droop down and hook back up again near the tips (see header image above). Immature trees are easier to identify from their foliage.

Figure 2. A good example of the whitish, streaky trunk bark of A. rockinghamensis covered in splotches of lichen. Atlas of Living Australia. © Tim, 2021. 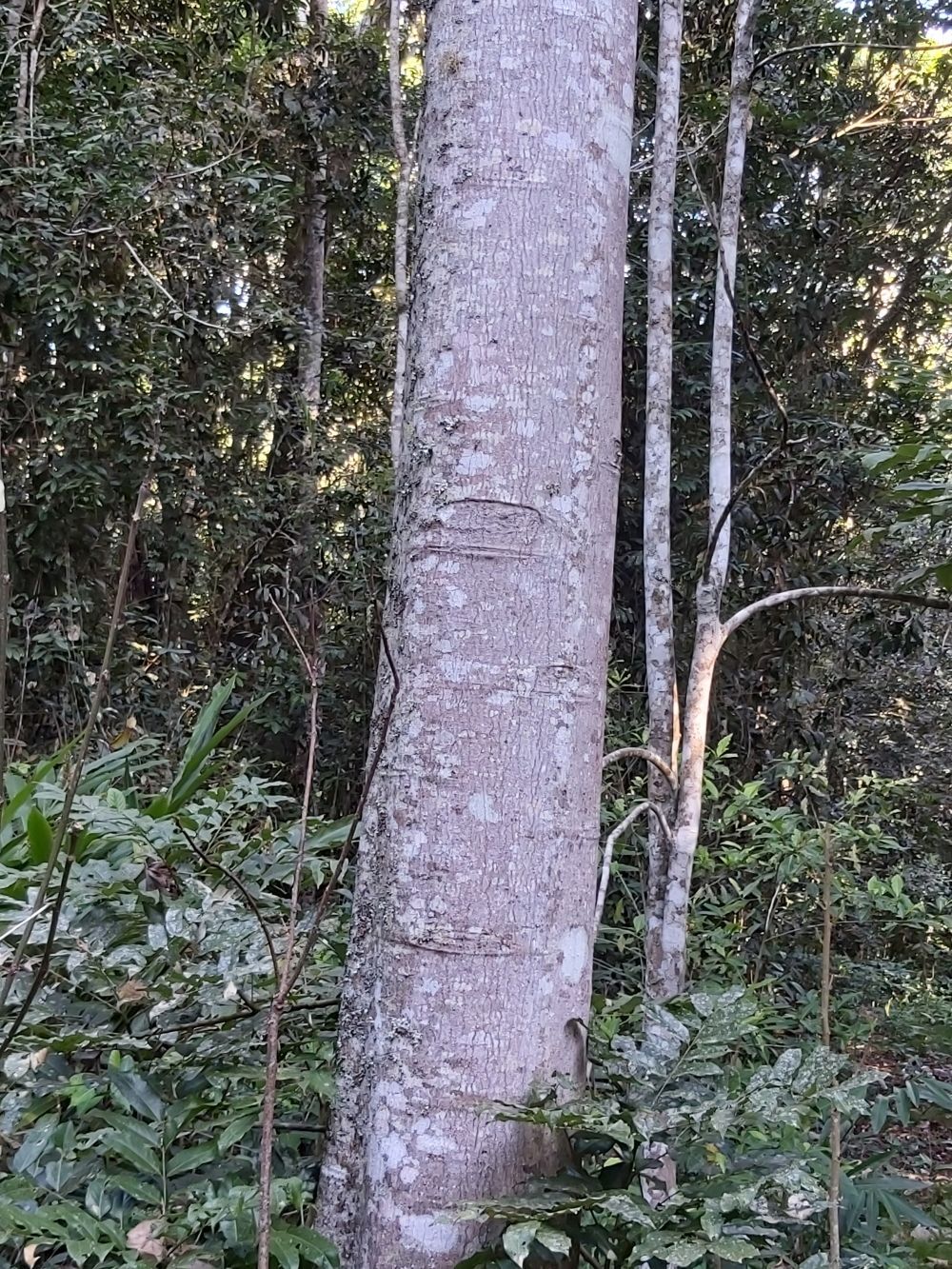 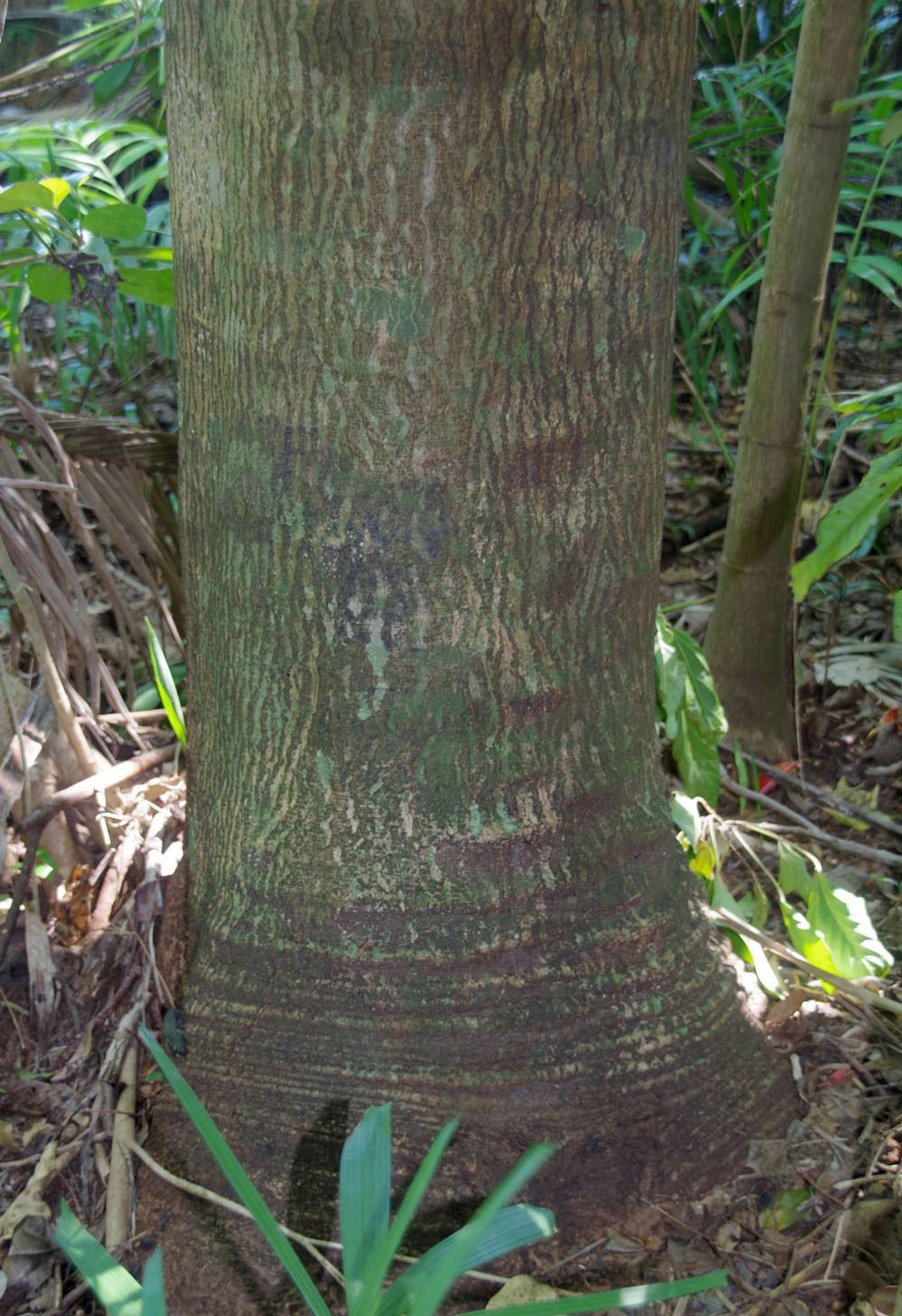 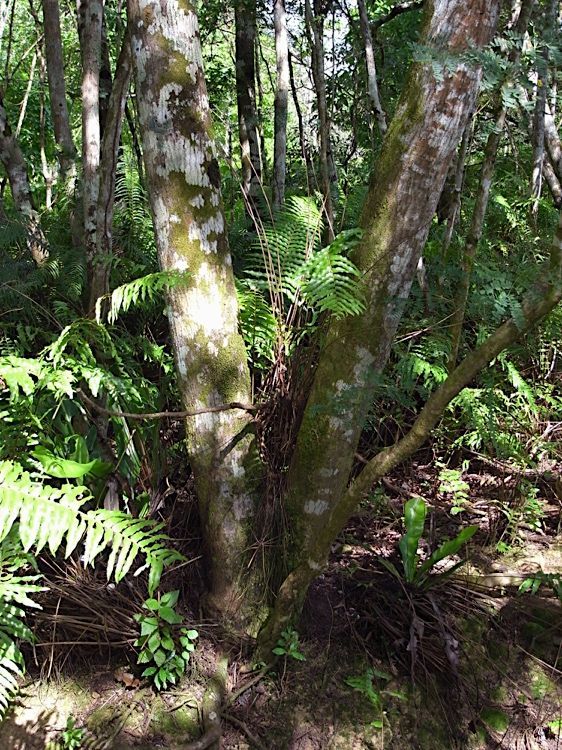 Candlenut leaves can vary significantly, particularly between young and old trees. Look for the two bulbous glands at the leaf-stem joint for certain identification. New growth is often covered in a white 'dusting' of fine hairs resembling sprinkled flour; this also gives the trees a silver sheen in spring, another key feature. The leaves are prominently veined, usually with 3-7 lobes but some species can resemble white fig (Ficus virens), covered in part 16 of this series. Unlike white fig, candlenut leaves have a papery (rather than leathery) texture.

Figure 6. An example of the leaf glands, centre, on an A. rockinghamensis. Atlas of Living Australia. © S. Fitzgerald, 2022. 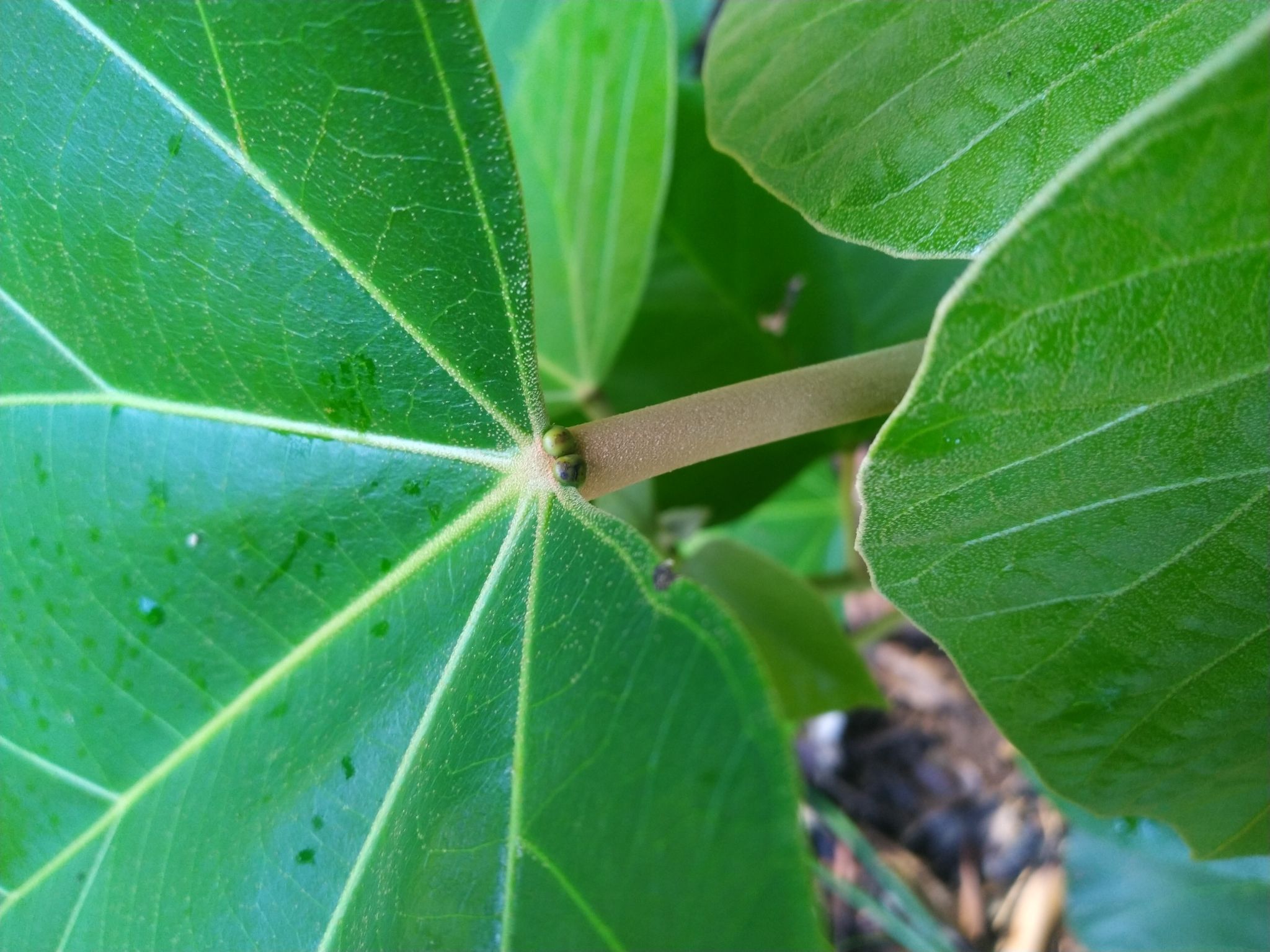 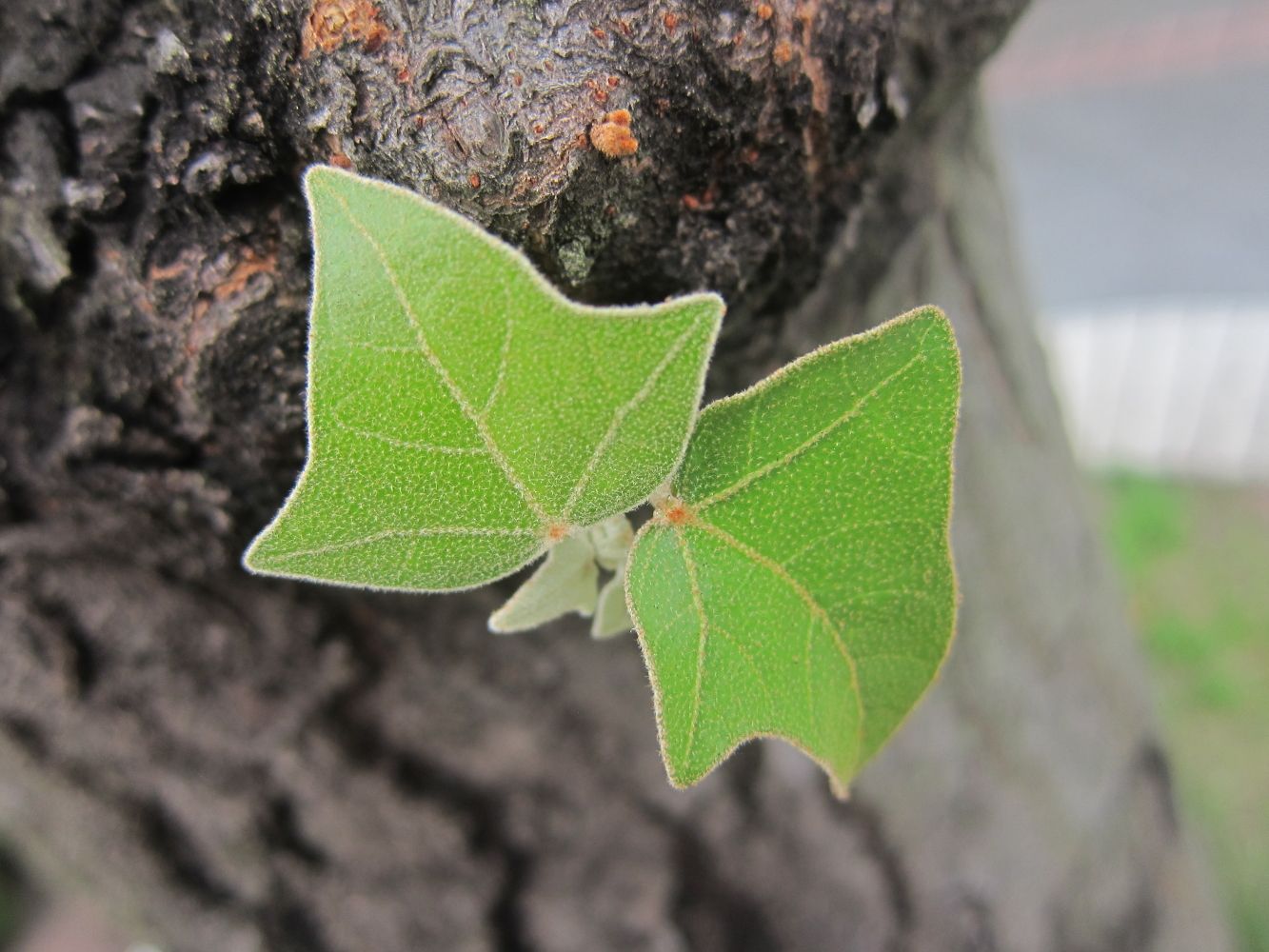 Figure 8. Lobed young foliage of an A. moluccanus. Atlas of Living Australia. © B. Shevaun, 2020. 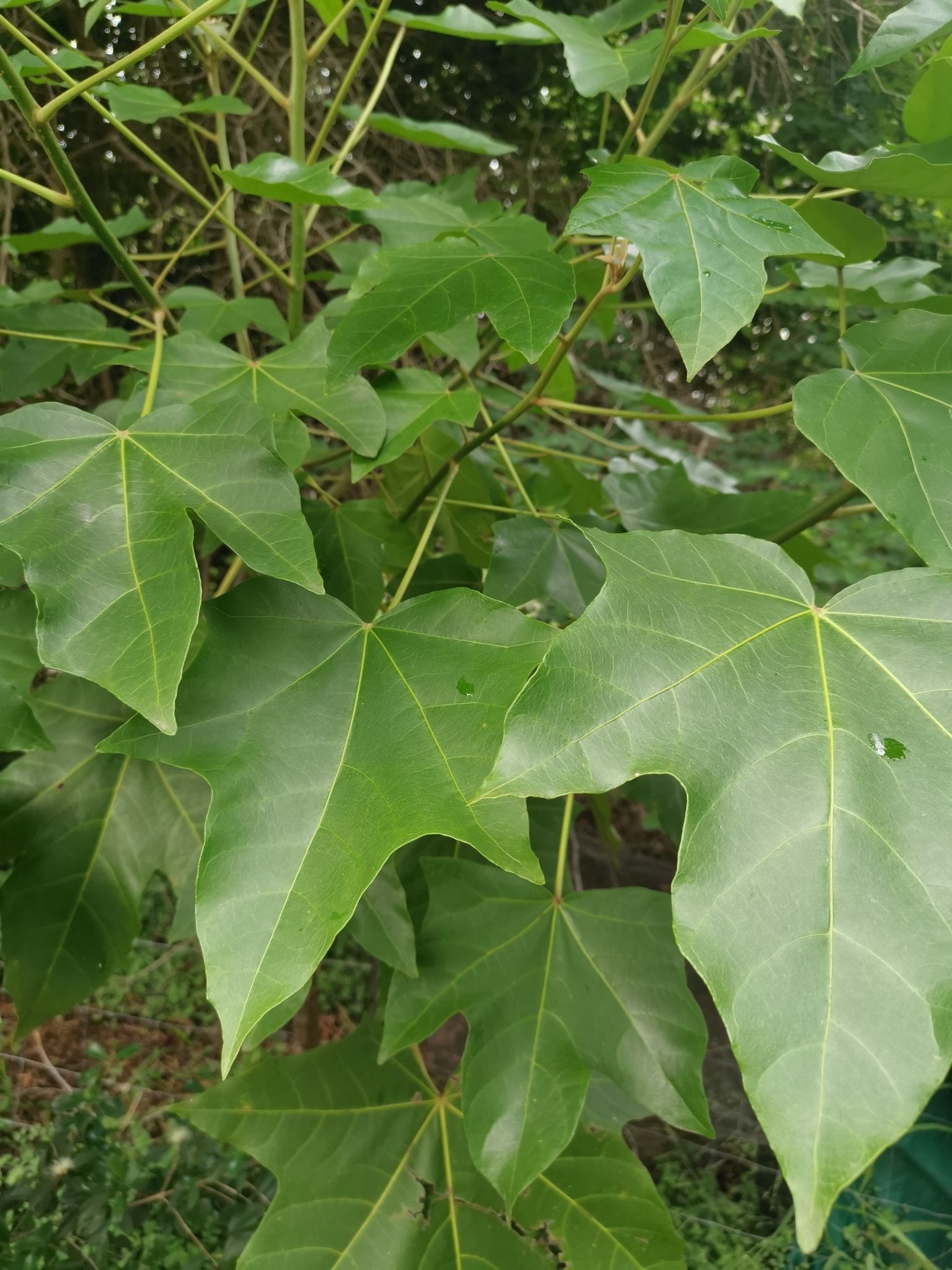 Figure 9. Example of the slightly lobed but overall 'heart' shape of an A. moluccanus. Atlas of Living Australia. © R. Chapman, 2007. 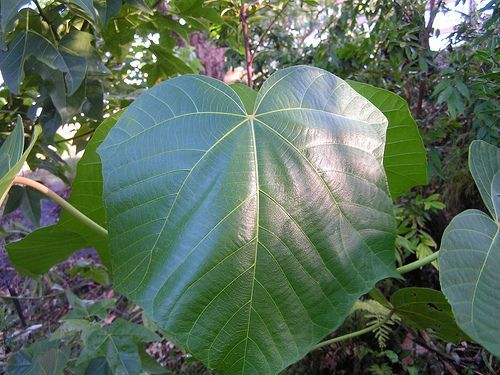 Figure 10. Example of the serrated, heart-shaped foliage of A. fordii. Atlas of Living Australia. © G. Cocks, 2013. 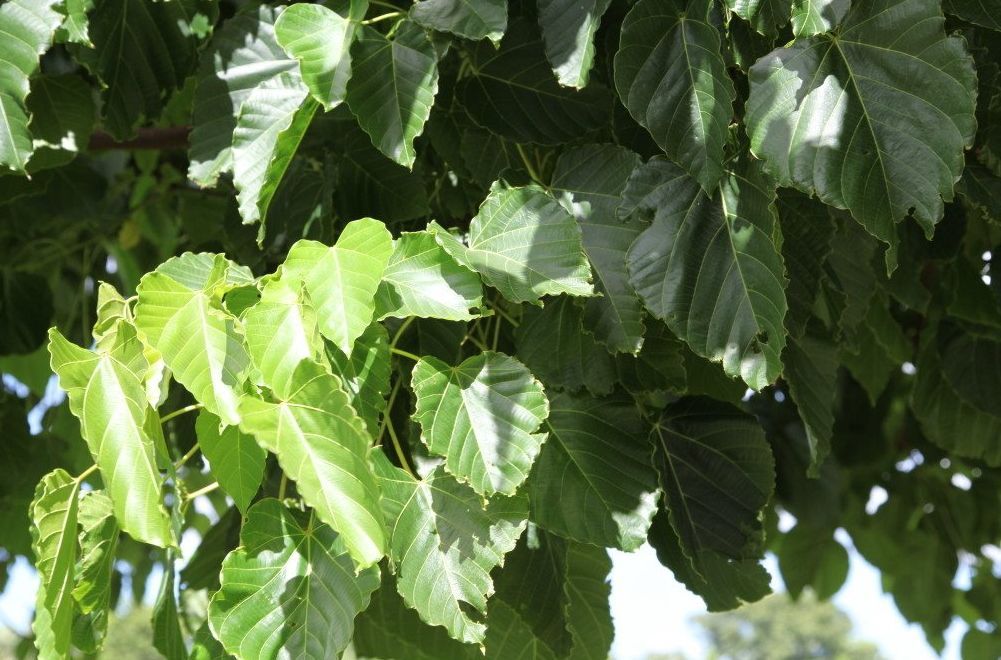 Flowers are five-petaled, white with no prominent anthers or pistil. They emerge on a stem (inflorensence) of 30-80 at one time. After pollination, a few will set into round, green fruits that exhibit fine segmentation seams. Fruit take some months to mature. The outer exocarp will begin to split at the seams and drop the hard endocarp seed shells to the ground. These shells are thick and tough and are best roasted until they crack open, revealing the white kernel inside. 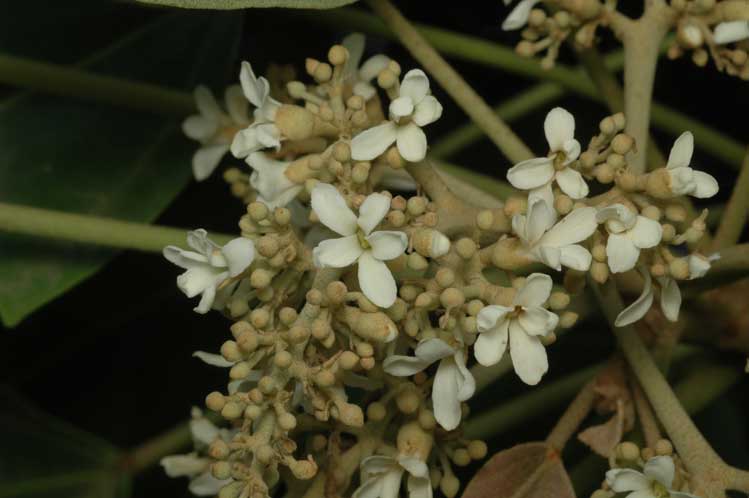 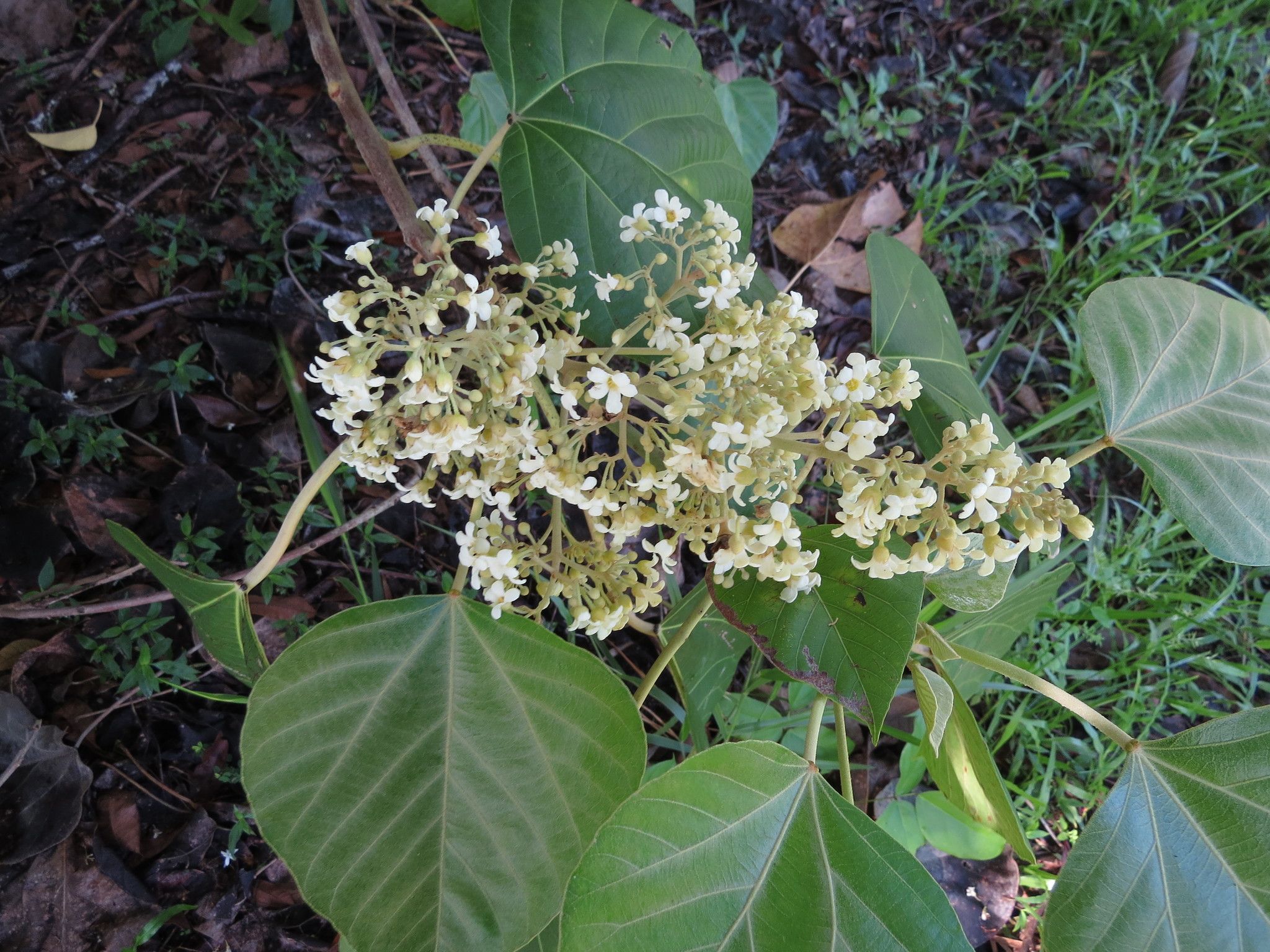 Figure 14. Green nut on A. moluccanus. The segmentation seams are barely visible (one extends upwards from the tip of my thumb). Sandy Corner Rest Stop, Ayr. © JPM, 2022. 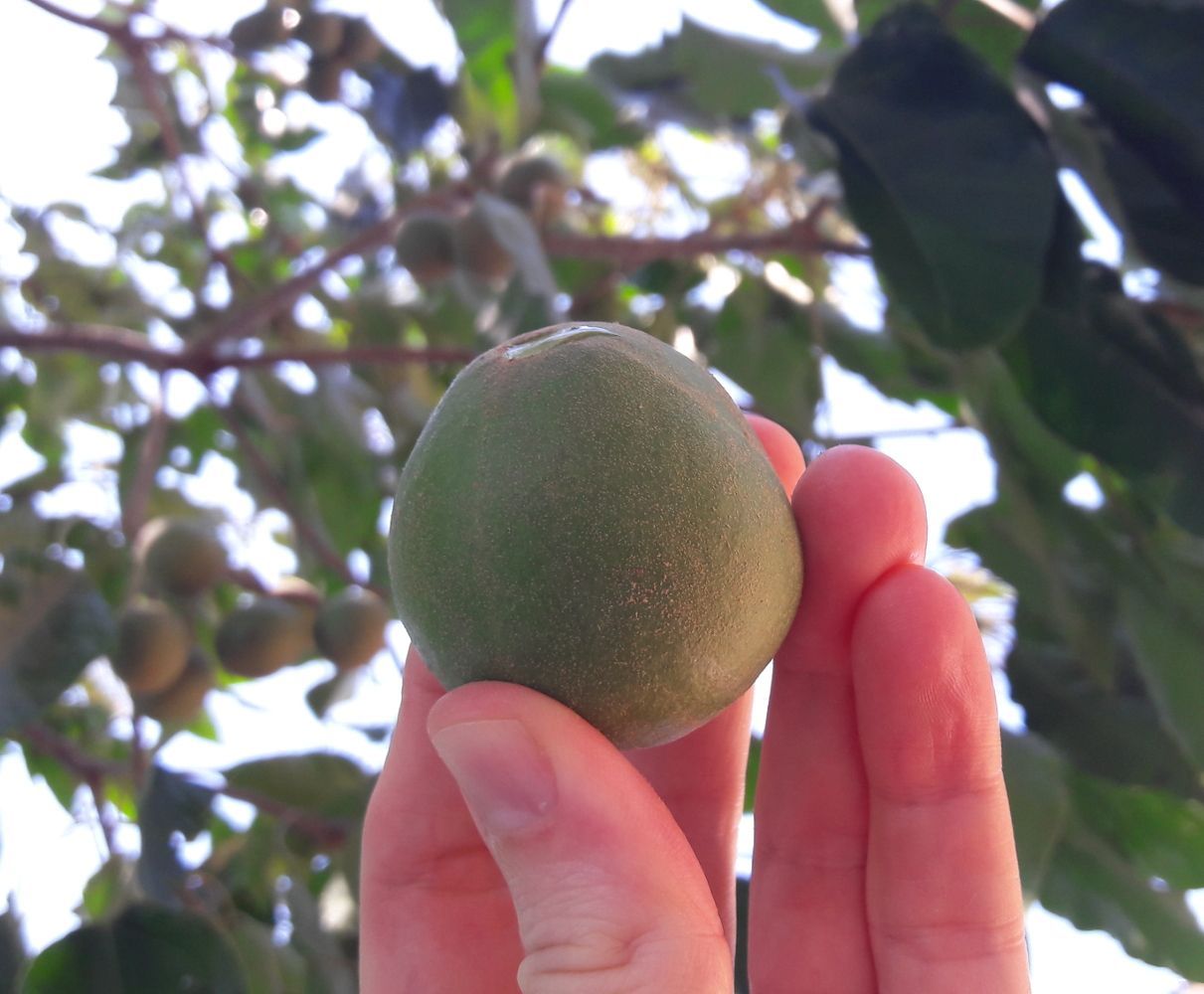 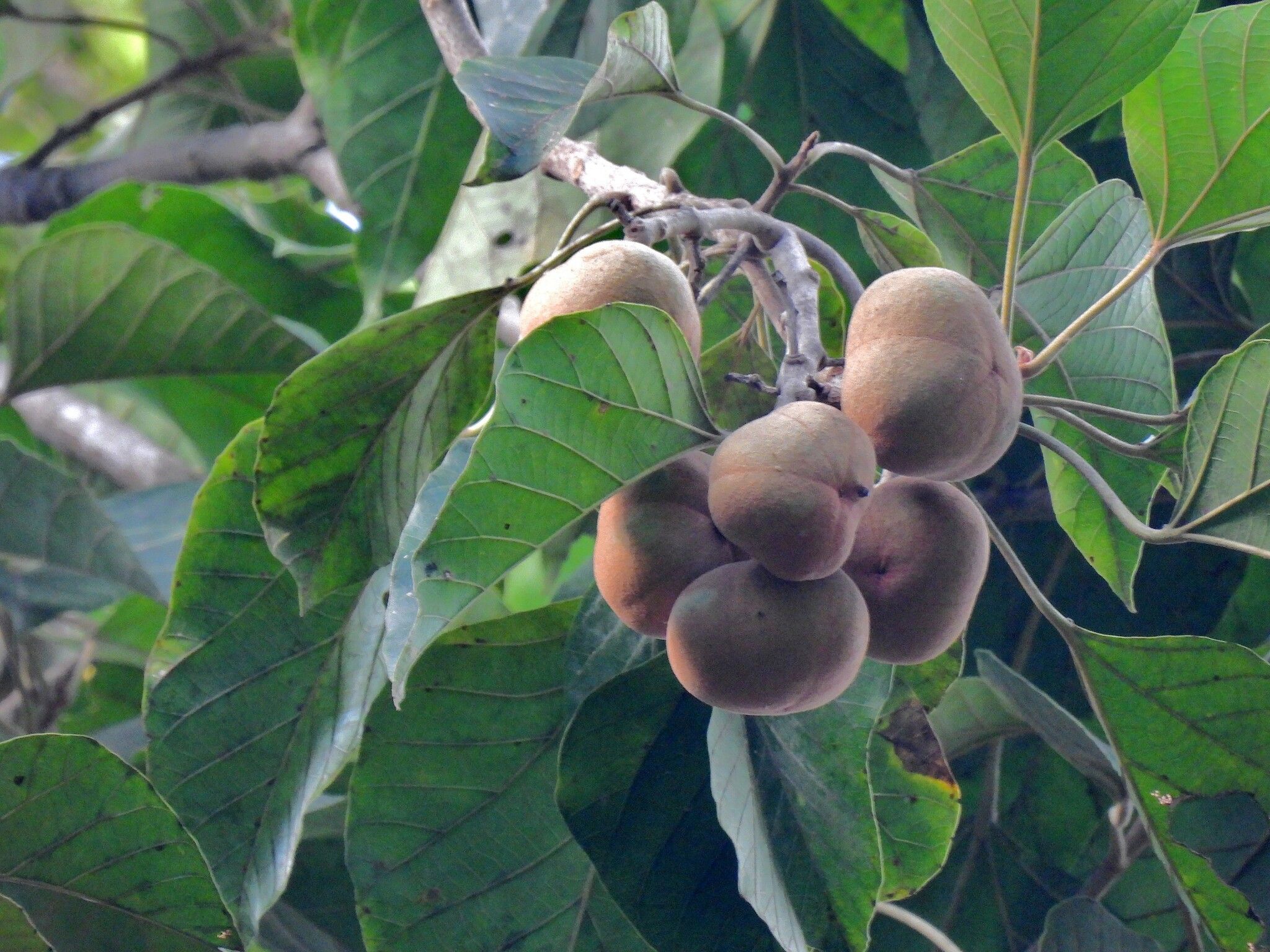 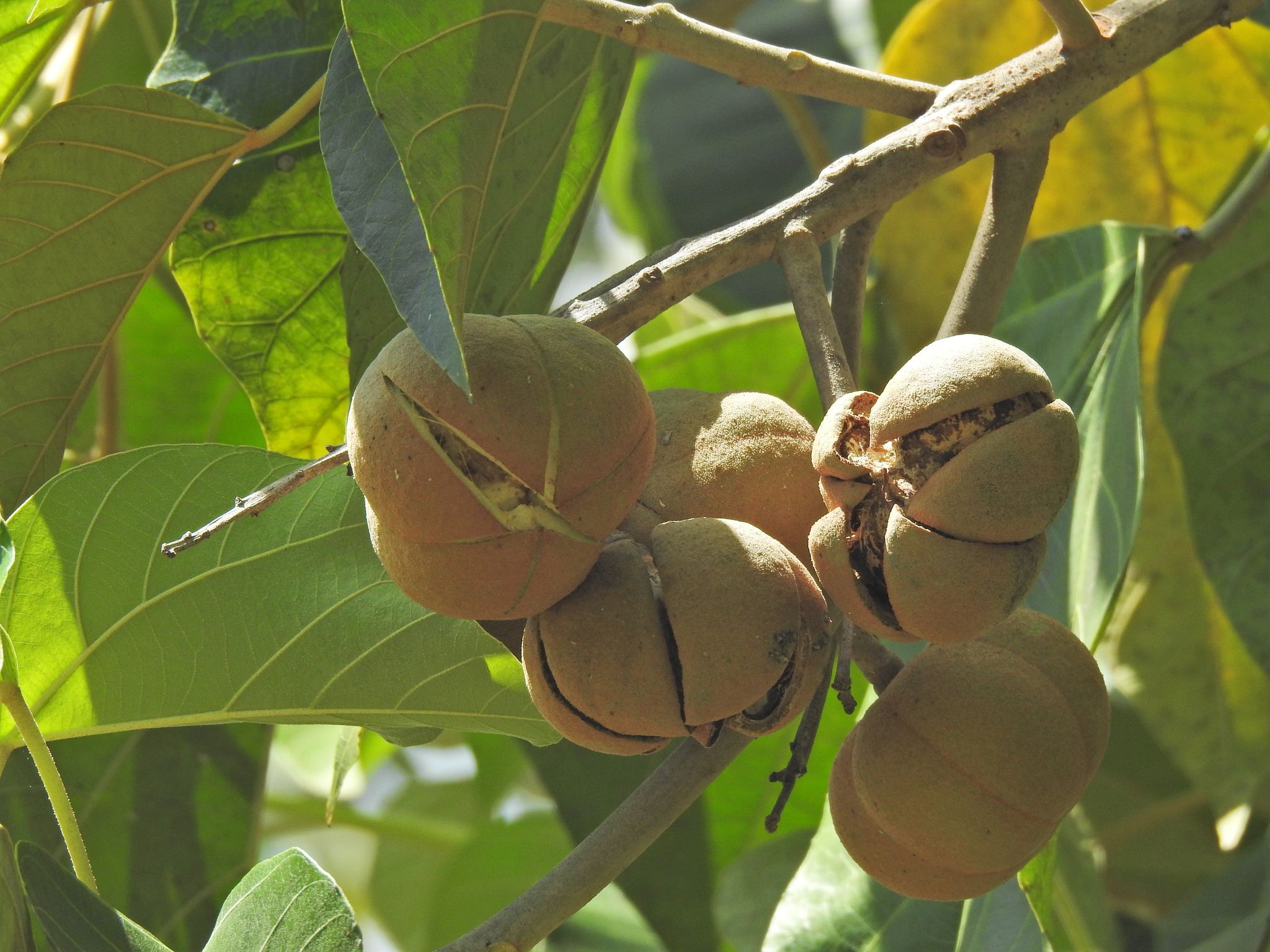 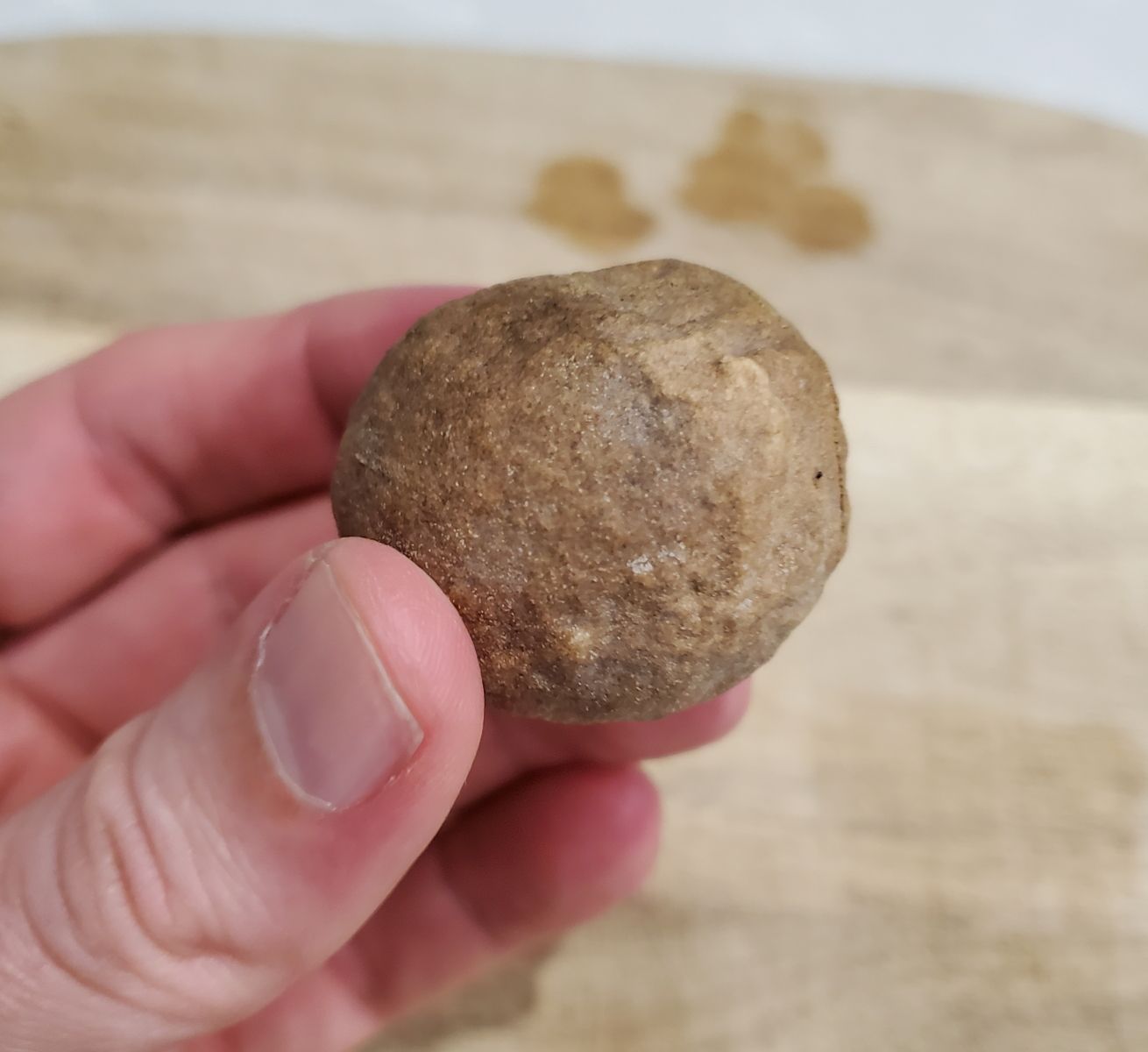 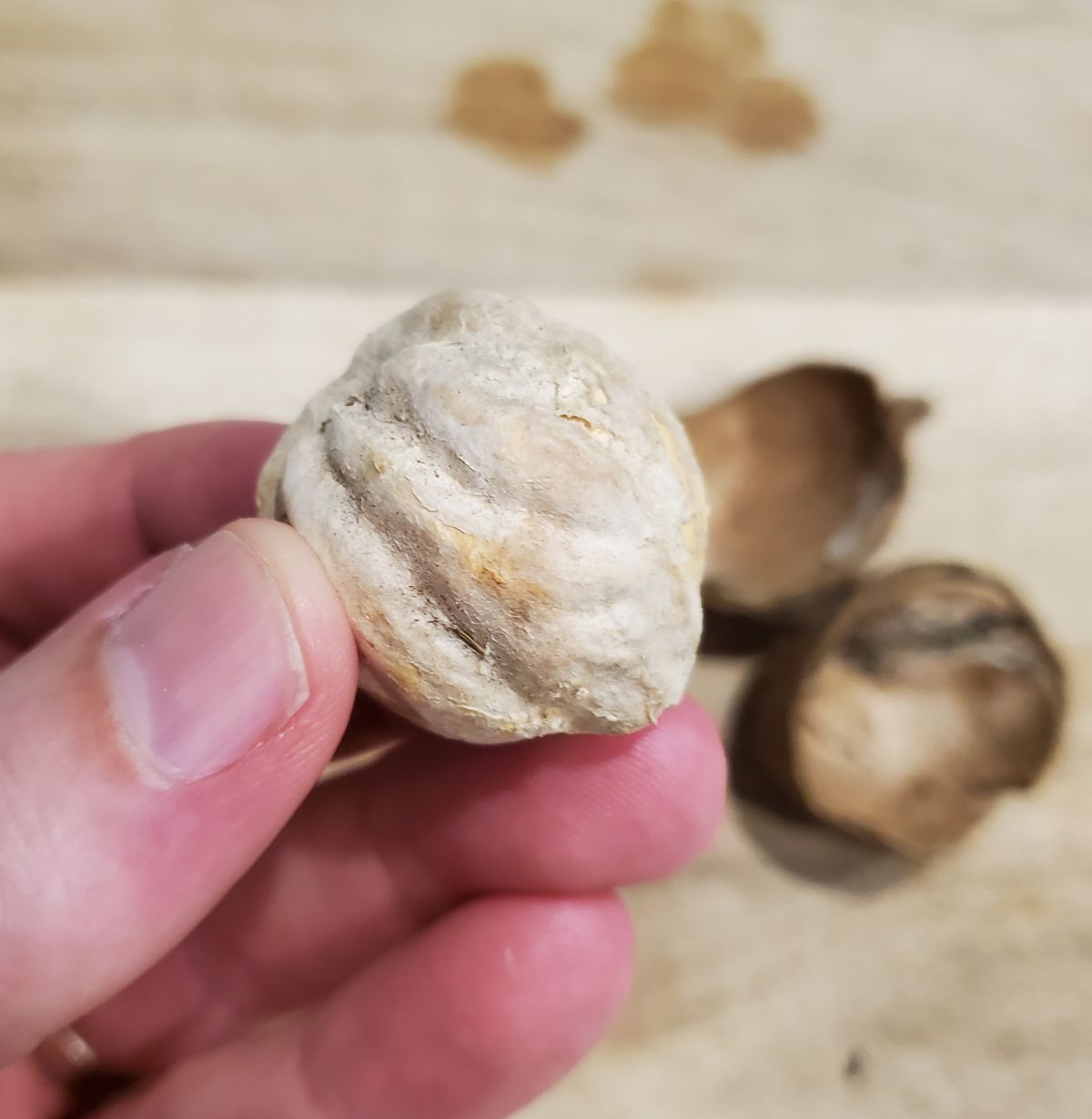 Figure 19. Kernel of a cracked shell, also conveniently demonstrating how thick the endocarp is. Oops! It's just cobwebs!! The developing kernel had been destroyed by some mould, or perhaps never fully developed because it was picked too early, straight from the tree. But I was only in Ayr on this day... oh well! Acquired from Sandy Corner Rest Stop, Ayr. © JPM, 2022. 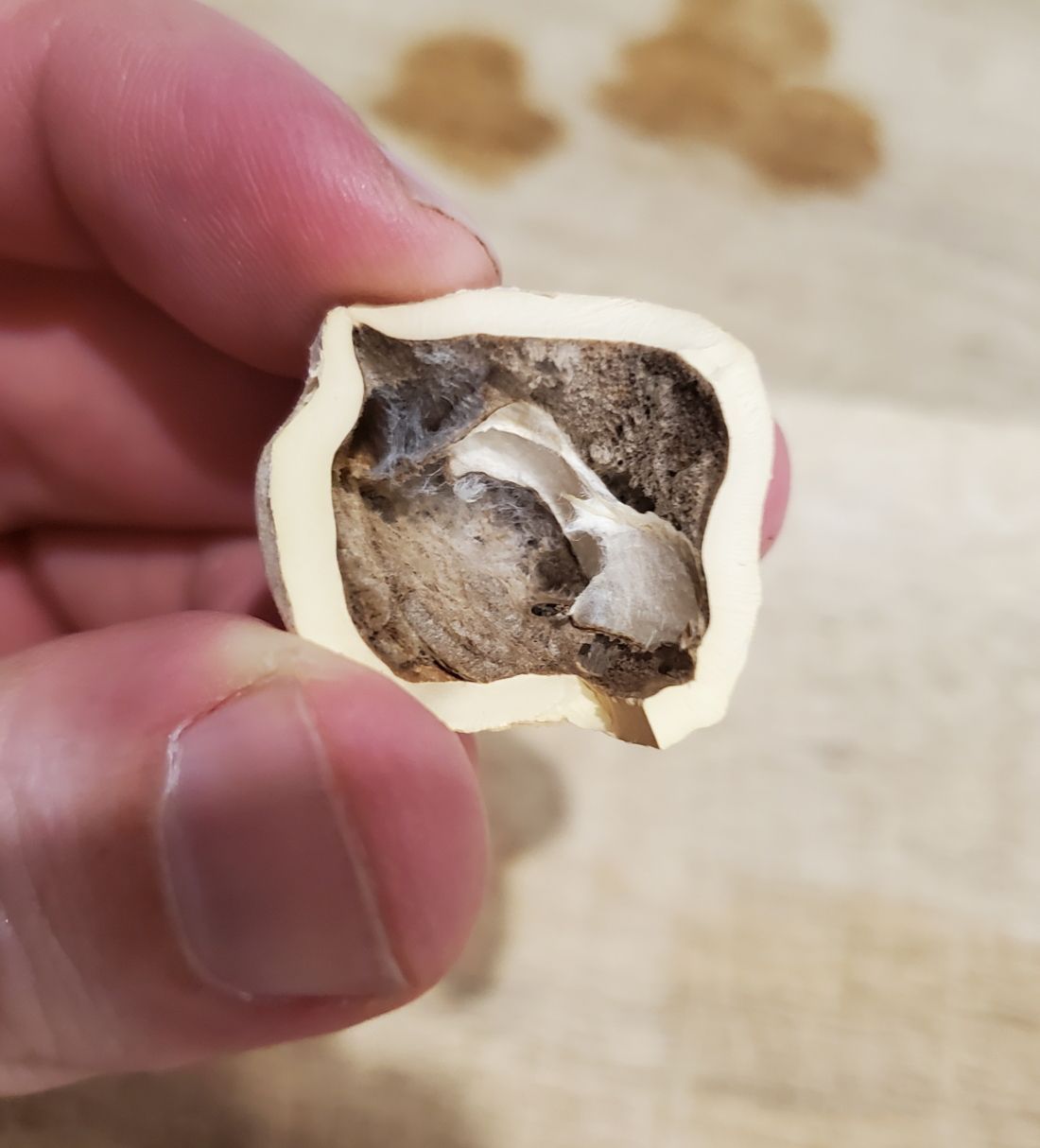 Figure 20. Actual demonstration of the kernel. Atlas of Living Australia. © I. Mcmaster, 2010. 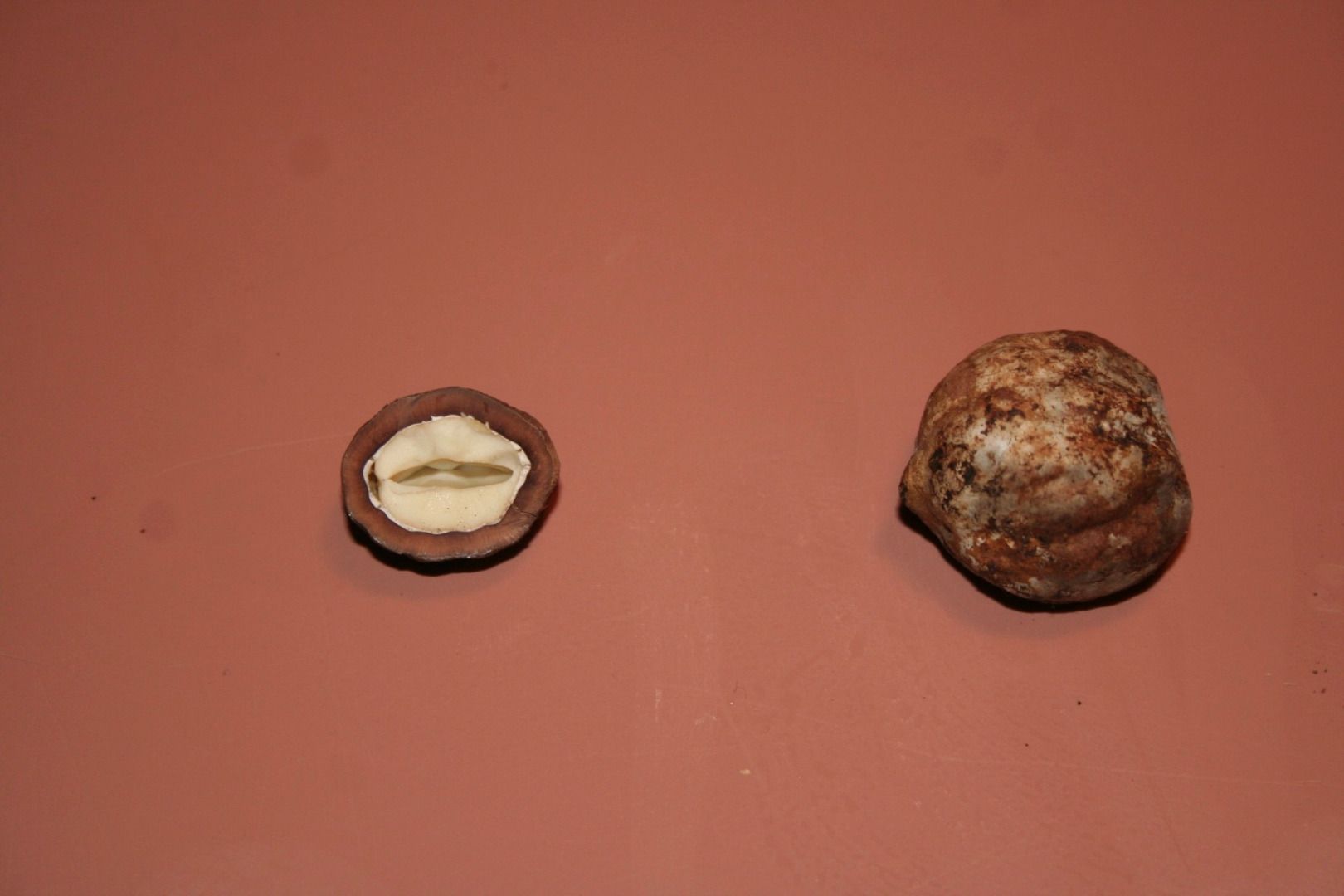 Candlenut has been used as a source of food and seed oil for millennia all across the Pacific, particularly in Malaysia, Indonesia, China, India, Philippines, Hawaii and other Pacific Islands. In its raw form it is toxic and should not be eaten; First Nation tribes of northern Queensland traditionally roasted the hard, inner shells on slow coals until they cracked, at which point they were cooled and eaten. Candlenuts are an excellent source of thiamine; Tim Low (Wild Food Plants, p.93) reports one Australian sample containing more than 4,000 μg (micrograms) of thiamine, a truly astounding amount.

Oil can be cold-pressed from the nuts and used in cooking, dressings and as fuel in oil lamps. 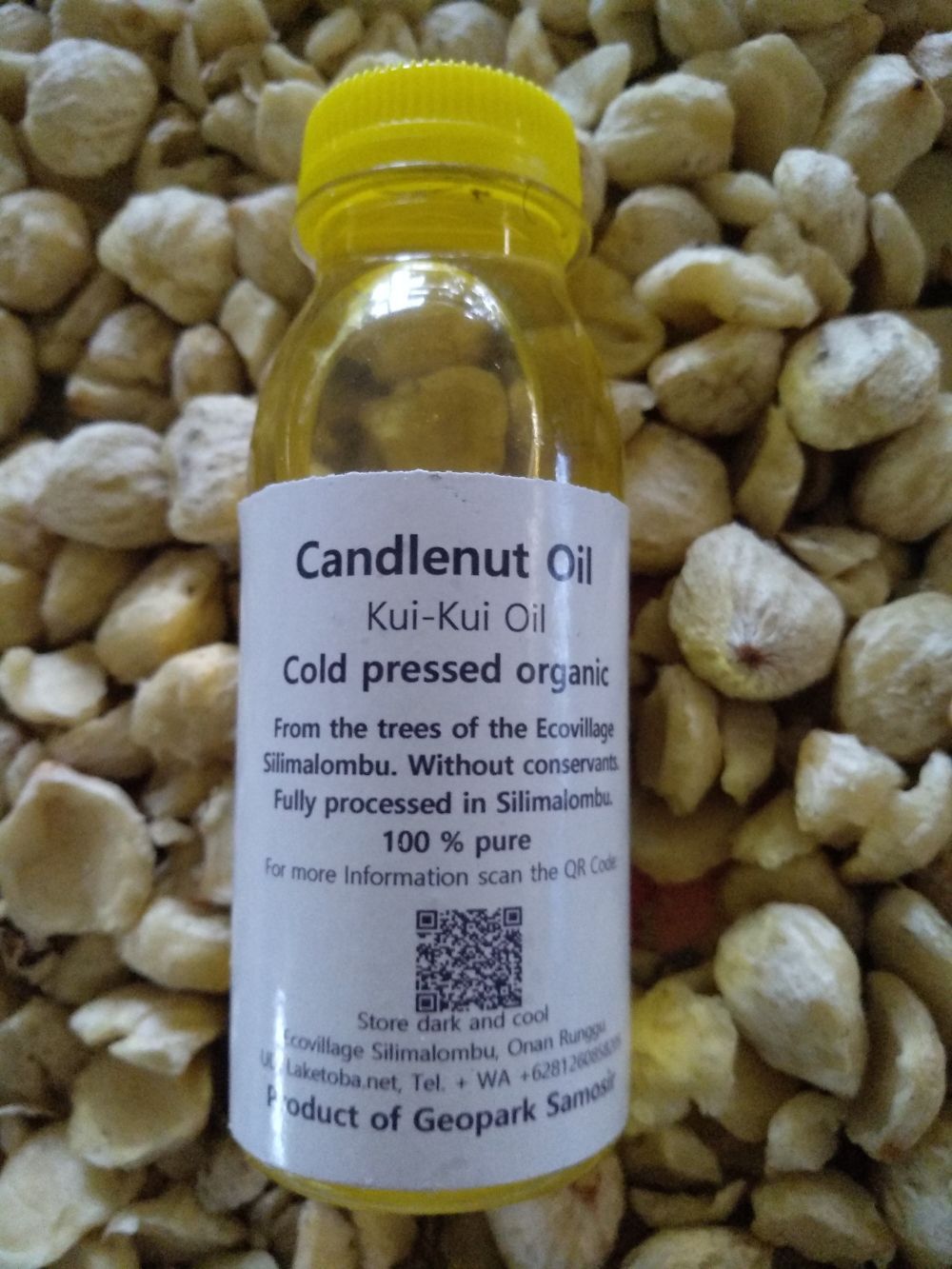 In Hawaii and some other Pacific Islands, candlenut kernels were skewered onto sharpened palm fronds and burnt at important ceremonies. Each kernel can burn for approximately 10-15 minutes, and this became a measurement of time in many of these places.

Candlenut kernels are toxic raw. It should not be eaten unless it is first roasted to denature the poisonous substances. Sap from cut branches, stems or fruit can cause topical dermatitis.

Aleurites as a genus has many close relatives of the wider Euphorbiaceae family. Many of these look-alikes are toxic raw and cooked, but their seed oils can have useful medicinal properties. Some of these genera include: Croton, which is prolific in Australia, has otherwise poisonous seeds but excellent medicinal sap used for skin healing; various species of Mallotus which are also very common in Australia with inedible hairy nuts on long beads; and the round-leaved Omphalea, mostly found on Cape York, also highly toxic. Some of these species were formerly classified as Aleurites but further research has diversified them from true candlenuts. None of these look-alike species exhibit the dual leaf-stem glands, or young leaf 'flour'. Some of their other features, such as leaf shape, fruit shape and flowers, are similar.
< Prev page: Pandanus (Part 21) | Next page: Macadamia (Part 23) >
Reactions: Mandy Onderwater

Pros: Everything! Informative, honest, real, accurate, respectful of Indigenous culture.
Cons: None. This article series is flawless in so far as I can tell.
This is the most informative, accurate, and honest series on Aussie bush tucker I've ever seen. Valuable to Aussie gardeners and foodies, encourages the preservation of our native species, and gives us a far better understanding and appreciation of the culinary knowledge of Indigenous Aboriginal peoples from across the country, without skipping out on the necessary warnings about toxic plants, plant parts, and the real risks of misidentifications.
Reactions: rubberchicken and JP 1983
Pros: I love this kind of bush tucker stuff!
Reading about some of your chief influencers I couldn't help wonder why I wasn't one of them... I'm just joking... seriously lol.

I grew up watching Malcolm Douglas and I still watch him today on YouTube because he really lived what he preached or documented for others to enjoy and he did it in a first-person amateurish kind of way that felt authentic.

I also completed the Les Hiddins 3-week survival course in the 90's when I was in the Army - I think I only just survived... But it was certainly memorable!

Anyway, thanks for writing and maintaining this ongoing article here on our forum about bush tucker etc it really is impressive!
Reactions: rubberchicken, JP 1983 and Mandy Onderwater

JP 1983
Cheers Mark! I'm ex-army as well (9th RQR), but I wasn't SAS so I never did the bush tucker training. I've always been a late bloomer but this knowledge will be invaluable moving forward into this increasingly crazy and uncertain world. Some of us can't manage our own gardens due to lack of space and this is the next best thing (and much less of a workload)!
Pros: Very informative and detailed.
It's an excellent article thread for anyone living in Australia. It has all the information you need, plus warnings! There are pictures to help you identify the plants to aid you in finding them.
10/10 from me!
Reactions: rubberchicken and JP 1983
Read more…

Malcom and Les bring back fond memories here too. My father started the 4 wheel driver training course back in the early 70’s in the Land Cruiser club and Dad being a veteran from the army spending the last yrs of his service in driver training , heading off to national parks and state forests was a regular on weekends from his driver training days he had an extensive knowledge of the tracks and trails throughout SE Qld.
Survival skills with a few staples and the camp oven was all part of the fun as a youngster.
i've see the lomandra here in the states, it was introduced in early 2000 - 20005 time frame in a few areas in the Carolinas very unique plant

Hi @JP 1983 can I ask what your source was for edibility. I have been referring to the below list for edibility, bit it is quite old and may well be incorrect. Thanks http://www.ausbushfoods.com/bushfoodsonline/backissues/Issue4/Iss4_2.htm

HelenCate said:
Hi @JP 1983 can I ask what your source was for edibility. I have been referring to the below list for edibility, bit it is quite old and may well be incorrect. Thanks http://www.ausbushfoods.com/bushfoodsonline/backissues/Issue4/Iss4_2.htm
Click to expand...

I posted a [Link] to my source in the wattle article with more than 60 listings and I individually cross-checked each one with other sources like the Atlas for Living Australia (best way to use the Atlas is to punch in the latin botanical name). In addition I cited Tim Low, Wild Food Plants of Australia (Sydney: Angus & Robertson, 1991 repr.), specifically referencing pages 41 (coast wattle), 152 (acacia gums), 179 (acacia seeds) and 180-181 (mulga "apple"). I found a few inconsistencies between listings, so I kept it to species well known and utilised for their edibility. Basically if you're far inland, most wattles will be mulga or dogwood, and the closer you get to the coast the more careful you need to be in your identification.

And just to prove that it won't kill you outright if by chance you harvest the wrong one, I went and harvested one of the toxic species (A. hakeoides) and ate a small quantity of roasted seed. It was slightly discomfiting stomach growls for a few hours followed by a more watery than usual stool.
Aussie Bush Tucker - An Introduction to Common Native Foods of Australia

A Beginner's Guide to Edible Weeds